The Government of Iverica is a constitutional, semi-presidential, parliamentary republic which derives its legitimacy from a formerly de facto and eventually, de jure succession from the Imperium Iberia or Iberic Empire. The Iverican Constitution refers to the government as a Republic which the constitution defines as an indivisible state of collective regions represented in the government. This unitary government has two separate heads, a head of state and head of government. The Government's power is maintained by both popular consent and constitutional authority. Citizens elect officials in both the executive and legislative branches of the government using the instant-runoff voting method. Some positions, however, are appointed by other elected members of the government.

Iverica claims to be the principal successor to the Iberic Empire. Iverican sovereignty is presupposed by this claim, and the state requires that foreign governments accept this position prior to any mutual recognition.

The Iverican Constitution is composed of several books—each containing various titles describing necessary facets of the Republican state. The constitution is amendable, and to date, includes 22 ratified amendments. In summary, it outlines a constitutional, semi-presidential, parliamentary form of government.

'Excerpt, The Preamble: Let it be known to all, that this charter of principles represents the emancipation of the Iverican people from the tyrannical and unlawful dominion of the criminal government over the Fatherland. It is the desire of the fair, and free people gathered under these articles to exercise the fundamental freedom to self-determined governance and rule. We hereby endeavour to form a fairer and just Republic in pursuit of the common good. This united people will strive to establish a community free from the evils of enforced silence, and oppression of man's personhood. Under Solidarity, our united strength will ensure defence against tyranny from within, and without, our united strength will seek only to promote common prosperity, and further promote the rights of the human person, whom we hold as the core of society. Declared under the eyes of God, in the stewardship of His absent servant in the crown, and made just by the principles of democracy, do the freely gathered people here, establish this great Republic of Iverica.

The Iverican Constitution is composed of 8 books each with varying numbers of "Titles" (Titulos) within them. The consitution also includes 22 Amendments as of 2020.

As a republic with democratic principles, the Republic follows a strict system of checks and balances enshrined in the constitution and upheld by each branch. The system allows for inter-accountability and ultimately, public opportunity to participate and maintain oversight on their lawmakers. 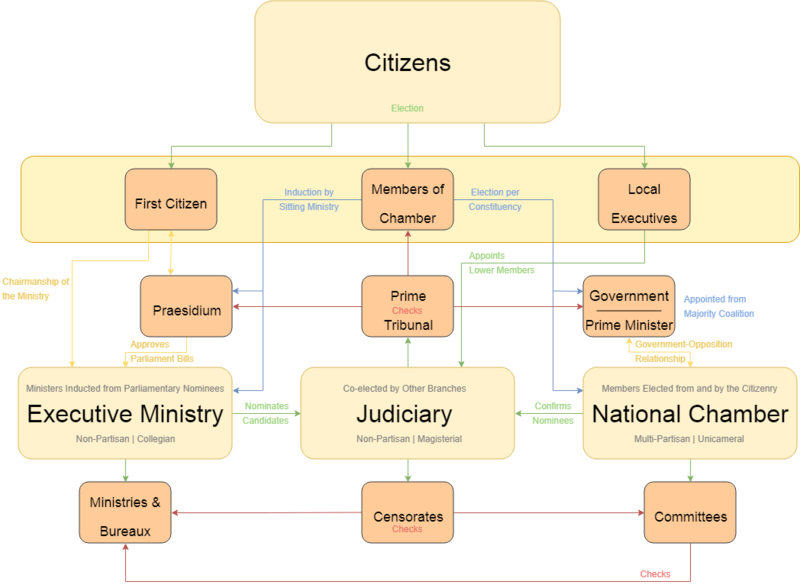 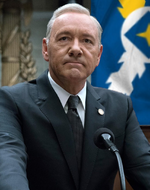 Acting as the executive branch of the Republic, the Executivé Ministerio abbreviated as ExecMin is composed of Cabinet of Ministers (27 from ministries and executive offices) serving a term of 7 years (excluding the Primo--serves 5 years). Executive power is essentially distributed among this group. They maintain relatively long terms to ensure that the continuity of their projects is not interfered with by mercurial public popularity. Despite this, their powers are held in check by stringent peer-review and inquiry by one judicial committee and one parliamentary committee. Each member is appointed from members of the parliament meeting certain seniority and distinction standards. The ExecMin cannot choose their candidates (as a check on their power), each political party vets and offers their choice for the position--the members of the sitting ministry then vote for the most eligible candidate among the choices.

Ministers are in charge of the day-to-day operations of their respective ministries. They are also expected to contribute projects and initiatives that benefit their respective fields apart from also complying with Ministry mandated Executive Orders and the laws passed by the legislature should it concern their department.

The Primo is neither superior nor inferior in rank and station to the Ministers. Despite this, he wields substantial influence as the manifestation of the people’s win as check and balance to the Ministry. Elected by popular vote. As First Citizen, the Primo holds the sole privilege to initiate a motion for Executive Order (only overruled by a 2/3rds Nay from the Ministry). Similar to the judiciary committee and legislative committee keeping checks on the Ministry, the Primo may order an inquiry or subpoena on any Minister--holding them accountable for their management of operations or use of Ministry finances. Sits in the Executive Praesidium (a panel of the prime departments) as Chairman.

The Current Primo of the Republic is Franso Deitorr, the 54th Primo to serve Iverica. 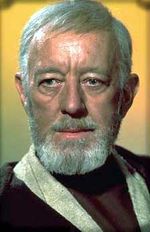 The National Chamber (Cámra Nasional), or the Parliament is composed of 512 Members of the Chamber (MeC) divided roughly into Government Majority Coalition (Government) and Opposition Coalition. The Chamber as a whole is responsible for litigation on policy and constitutional amendment. During Cameral Assemblies, members from the assorted parties composing the Majority and the Opposition hold a sequence of sessions which include structured debate, case presentations, and committee deliberation on matters of legislation. Assembly outcomes decide any long-term law involving taxation, civic policy, and national regulations. Broad and encompassing powers reliant on a 2/3rds majority vote and ExecMin review before proposed bills can be enacted as laws.

The Iverican constitution places no limit on number or nature of political parties, barring that they cannot be, under any circumstances, a Communist or Fascist party (such terms are defined in the 2nd Amendment to the Iverican constitution). As a result, the Iverican political climate is diverse and multi-partite. Enshrined in the constitution is the right of all represented parties to elect members of parliamentary committees charged with specified duties. Members of the Parliament are subject to the ruling of the Judiciary Censorates and the results of investigative or inquisitive tribunals.

The Prime Minister until the next Cameral Election (every 4 years as a norm), though he maybe impeached by a 2/3rds majority vote from the Praesidium or by the ruling of the Supreme Court.

Members of the Chamber

Members of the Chamber represent constituencies which vary from city districts to rural barrios. They are elected using Single Transferable voting system and serve a term of 4 years. A candidate must be at least 21 years of age at the beginning of the campaign period and have been a citizen for at least 9 consecutive years. Each Member has one vote per motion in the Cameral Assembly which they are obliged to use in the interest of their constituencies and to the best of their moral reasoning.

Constituencies are ranked and sorted according to their geography, tax-paying population, and population density by a Cameral Census Committee. Each constituency requires a Member of the Chamber to be represent it in the National Chamber. According to the 2020 Cameral Census, each Member represents between 80,000-150,000 tax paying citizens. Should a vacancy occur, local executives are obliged to call for a special election.

A Member of the Chamber is eligible for ExecMin candidacy with 2 terms of experience and distinction within their own party; requiring letter of recommendation from their party leader. 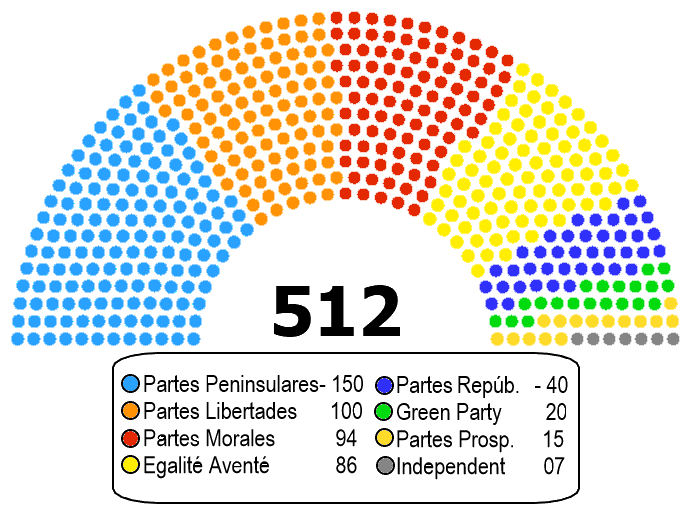 The Judiciary (Iudicaturá) also known as the System of Judicial Courts (L’Cortes Judicio) is the judicial branch of the Republic. It consists of a system of courts from the Supreme Court (Cortes Suprema) to the Municipal Courts (Cortes Municipios). The Judiciary has jurisdaiction over any organisation or government employed person. All civil servants, uniformed and non-uniformed personnel, may be investigated or prosecuted by the System of Courts. Courts are headed by Justices or Judges and are assisted by a praetor and a council of plebios (who must at least be licensed para-legals). Both Justices and Judges are professional civil servants all of whom must have passed a Judiciary Board Exam, which itself requires a pre-requisite Jurisprudence degree at the least. Justices are distinguished by a tenure of years active as a judge.

The Judiciary has the primary function of interpreting the constitution and ensure that it is upheld in civil disputes, litigation, and governance. The role of the Judiciary is further specified by the duty opf carrying out this interpretation free from influence by both executive and legislative branches. They are to be impartial to either branch of government in keeping with the principle that no citizen is above the constitutional law.

Justices are selected by an independent citizen's committee called the Judiciary Electorate (Iverican: Praesidio dei Justicia). They are responsible for appointing positions in the various courts of Iverica. The Electors that compose it are themselves recommended to a committee composed of the ExecMin Attorney General, the Chief Justice, the Head Electorate, and one other Justice from any court. This committee votes to accept or reject candidates in rounds, each round cancelling out the candidate with the least votes until the needed number remains. After each round, a member of this committee is required to justify their choice.

The Judiciary Electorate Board (Praesidio dei Justicia) is made up of 7 members. It must be composed of two former Executive Ministers, two Members of the Chamber with at least two terms of experience, two former judges, one appointed citizen attorney.

Censors are civil servants who are Justices, judges, attorneys, or paralegals. They make up Censorate Committees which keep National Chamber committees and Executive Ministry Bureaux in check. They review or observe proceedings and ensure that proper procedure is followed. Consorate committees are ranked according to security clearance and competence, with top-level censors requiring security checks and vetting processes before acceptance.