The Sahrabic name ري﻿﻿اديا﻿ Riadīya originated as a colloquialism in the country's early history. It was popularized during the heightened nationalism of the Riadiyan Revolution, but only became the country's official name upon the foundation of the contemporary Republic.

The name itself does not mean anything in Sahrabic. It began as a slang abbreviation for the Pioneer Company (Sahrabic: الشركة الريادية aš-Šārikat ar-Riadīyat, and it continued to be used in reference to the Emirate that succeeded it. The abbreviation may have an origin in international trade and immigration, as it's believed that the suffix -ia may be borrowed from an Ahromance language. 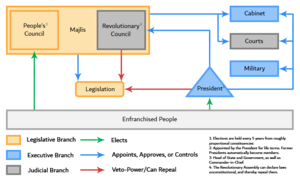 The Riadiyan government is composed of three branches:

The People's Council is directly elected by the people of Riadiya. Elections use first-past-the-post and are held every five years in districts of similar population, which the President has the responsibility of apportioning. All bills originate in the People's Council, but the President may, in practice, also propose bills when a special session is called. Bills are passed by a simple majority.

The President holds supreme executive authority as Riadiya's commander-in-chief. The President is also the chief diplomat, is responsible for organizing the census and apportioning the constituencies that elect the People's Council, can summon the Majlis or either of its houses to a special session, and call referenda to amend the Constitution. The President also holds some legislative power, with the de facto power to propose bills and the power to veto bills which have passed the Majlis.

The party is considered the founding party of the contemporary Riadiyan Republic and initially governed it under a de facto one-party state.

The Workers' Party was founded in the early 20th century as an alliance of communists, socialists, and trade unionists. The party essentially succeeded the leftist faction of the Riadiyan Party--the only party in government at the time--and quickly became the only competitive opposition.

The Workers' Party is currently the second-largest party in the People's Council and forms the opposition along with the Islamic Community of Riadiya.

The Islamic Community of Riadiya (Sahrabic: أمة الإسلام الرياديا Ummat al-Islām ar-Riadīya) is a centre-left political party in Riadiya associated with Riadiya's Muslim community. The party seeks to represent the unique concerns of the Riadiyan Muslim community, and it is generally described as socially conservative and economically leftist. The party consists largely of social democrats, but presents itself as a big tent party representing the diverse perspectives of Riadiya's Muslims.

The Islamic Community has a de facto alliance with the Workers' Party, and together they form the opposition in the People's Council.

Riadiya has a hybrid legal system with characteristics deriving from both civil law and fiqh. It often bears a resemblance to common law in practice.

There is a tiered system of courts, with the Supreme Court as the highest court. The Supreme Court and other appellate courts are appointed with the approval of the Majlis and the President, while courts of first instance are elected by local communities. Judges often come to decisions singlehandedly, as courts use an inquisitorial system rather than an adversarial one, but appellate courts generally consist of a panel of judges.

The Riadiyan Armed Forces consists of land, sea, and air forces. Military service in Riadiya is considered a constitutional right, and able adult male citizens of Riadiya are permanent members of the Riadiyan militia.

Although historically the Constitution has been interpreted as requiring a sort of universal conscription, the Revolutionary Council has since interpreted mandatory membership in the militia as, in practice, a constitutional right to keep and bear arms. As such, present-day Riadiya has an all-volunteer army and no active military conscription.

Retrieved from "https://iiwiki.us/mediawiki/index.php?title=Riadiya&oldid=224028"
Categories:
Hidden categories:
This page was last edited on 4 July 2020, at 02:55.
Privacy policy
About IIWiki
Disclaimers