The Federal Republic of Acadia (Lysian: Le République Fédérale d'Acadie), more commonly known as Acadia (Lysian: Acadie), is a federal presidential constitutional republic consisting of [number] provinces and a federal district. The nation is located on the continent of Aurelia, bordered to the east by Shffahkia, to the north by the Diné Republic and sharing a sea border with Asgeirria. At a population estimated at about 43.2 million people, Acadia is a fairly sized nation. The capital and most populous city in the country is Auvergne.

The first to populate Acadian borders were the Diné, whose ancestors may eventually trace back to the first settlers from Marenesia, however historians can not agree who their ancestral group really was. The native people who settled the area in around 800 CE formed a short-lived confederation of tribes known as the Diné Confederation, however the multiple tribes, though united culturally, were often involved in several disagreements and skirmishes which led to its dissolution estimated around 50 years after it formed. At around 1300 CE, the formation of the Dinénahasdzáán Empire was first documented, and the native nation thrived for about 300 years until the arrival of Europan settlers from Lys.

In the 17th Century, settlers from Europa first arrived in what is now Arcadie and established the city of L'Arcadie and the Arcadia colony, later renamed to Acadia. The colony merged with the nearby New Normandy and New Lysia colonies to form the broader colony of Acadia, which was eventually incorporated into the Shffahkian colonies and later the Shffahkian Empire. After the Independence War of 1830, the short-lived United States of Acadia was annexed into the First Shffahko Republic. As this state devolved into a dictatorship, Acadians were angered once again and rebelled in the Shffahko-Acadian civil war, leading to the eventual creation of the Federal Republic of Acadia, and opened the perfect opportunity for the collectivist revolutionaries in Shffahkia to rise.

The origins of the name "Acadia" come from the first colony in Acadia, the coastal Arcadia colony. "Arcadia" originates deep inside Tagmatium and supposedly means "refuge" or "idyllic place." Henry IV of Lys is rumored to have first dropped the r in Arcadia, leading to the general dropping of the r throughout Lys and the Acadia colony, though this is disputed, and some believe that the name change came from a mistake in the widely popular Atlas Paneurthica.

Almost all of inland Acadia is a desert, known as the Acadian desert, whereas on the coast, where most of the population lives, incoming sea breezes conflict with the warm desert winds which allows for more weather patterns and a slightly cooler climate. Along the Shffahko-Acadian border, several mountains tower above river valleys.

Landscape in Acadia varies from the Mountains in the East to the plains of the desert. The desert that makes up much of Acadia is formed by a rain shadow, caused by both the Eastern and Coastal ranges. There are a few major rivers that flow through Acadia; three major rivers in Acadia are the Louisiane, Vert, and the Nord. Two areas of Acadia are disconnected from the mainland. These are Nouvelle-Normandie (New Normandy) and the island of Alquiér.

New Normandy, located across the [name] Strait from Acadia, is fairly similar to mainland Acadia landscapewise, with a coastal plain instead of hills, and with a slowly inclining terrain to hills on the edges of the region. On Alquiér island, the landscape is very mountainous, centered on the small mountain range in the center of the island, rising from sea level to 1000 meters in the mere scale of the island.

The climate of Acadia consists mostly of BWh (Hot desert climate) in the Köppen–Geiger climate classification system. The coastal areas of Acadia and Alquiér Island have a BSh (Semi-arid, steppe climate)-class climate. Because New Normandy is a more southerly landmass than mainland Acadia, it has a Cwa (Humid sub-tropical) climate. Over all, most of Acadia is a desert nation, except for a few pockets of other climate zones in other areas.

The history of Acadia is one filled with conquest and revolution. The people of Acadia are willing to withstand the rule of another power, whether that be the Lysians,Shffahkians, or any other foreign power that lays claim to Acadian soil, the Acadian people will fight back.

The first records of human settlement in modern day Acadia date back to around 700 CE, with the first permanent settling of Acadia in about 800 CE, when civilization begin to further develop in the region and the local tribes formed a nation now known as the Diné Confederation, due to its nature as a union of tribes of Diné culture. The Confederation is estimated to have fell apart about 50 years after it was first formed and the tribes went their separate ways. 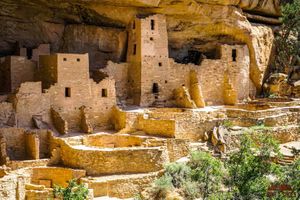 In the following centuries nothing really noteworthy to historians took place. Tribes built settlements like the cliff dwellings in Deux Falaises.This allowed the separate tribes to develop, undisturbed by outside forces, independent of Eurth itself. These days are known by historians as the Dinese Isolation period, marked by relative peace between tribes, development of culture, identity, and technology, and isolation from the affairs of the wurld.

After about 500 years of an isolationist period known as the Dinese Isolation, change was in the air. A tribe known as the Dinénahasdzáán, meaning "homeland eurth", using the Diné "homeland" tribe name, combined with nahasdzáán, the Diné word for "eurth" (in this case referring to the soil), began to become a more formidable force.

The Dinénahasdzáán began to exert influence on and incorporate local tribes and city-states. In 1332, the nation formed the Dinénahasdzáán Empire, an Empire consisting of most of the Diné nations, and sole paver of Acadia's pre-colonial history. The Empire made the first road system in Acadia, and using outside technologies as it expanded, created the first writing system in the country. The Empire united the final three tribes into its dominion, giving the Grand Chief control over all Diné lands. However, expansion did not stop there. The Empire expanded beyond the previous Diné lands to encompass much of the modern Acadian interior, leading to its maximum extent in 1587 CE. As the Empire expanded more, so did Dinese knowledge of Aurelia and eventually a small piece of the wurld around them. Over all, the Dinénahasdzáán Empire eventually became a powerful empire capable of harnessing the power of the Diné people, an intelligent empire, and seemingly unstoppable.

The Empire saw its end when Lysian colonizers founded L'Arcadie in 1638. The Lysian Empire seized the coasts and eventually the much more capable Europan power was able to overcome the formidable Dinénahasdzáán Empire in the Conquête Intérieure (Interior Conquest) wars, when the Lysians, aided by the Désert tribesmen, took down the Empire, which lead the way toward the Lysian "back-stabbing" of the Désert tribe, and the formation of Acadia, New Normandy, and New Lysia, all eventually coming under the banner of the Acadian colony.

Retrieved from "https://iiwiki.us/mediawiki/index.php?title=Acadia&oldid=285928"
Categories:
Hidden category:
This page was last edited on 13 December 2020, at 18:45.
Privacy policy
About IIWiki
Disclaimers