Hexanesa (meaning "Six Islands" in Laimiaic), officially the Judgedom of the Hexanesa are a small breakaway state in the north west of Europa, unrecognised by any other nation on Eurth. It lies between Tagmatium to the west and Deltannia to the east, with Tal Shiar and Havebergen to the south. The Hexanesa have a population of 216 thousand, which is mainly concentrated on the islands of Efmoseia and Polyagios, the two largest, and even then spread along the southern coasts of the islands.

Hexanesa defines itself as a democratic republic, with the head of state and government, the Great Judge (Laimiaic: Megas Krites) being elected every six years by a general election of the island's eligible population. The current Megas Kritissa is Evangela Leotykhidissa, who has held office since 2016. The government gets its legitimacy from being the remnants of the military and civil administration that did not leave the islands after the end of the Long War and the demilitarisation of the islands. The government of Tagmatium was perceived as abandoning the population of the islands and scorning the sacrifices over the decades of war. The nation's capital, Gournaion, is also its largest settlement, cultural, economic and religious centre. It lies on the eastern coast of the island of Efmoseia and has a population of just over 20,000.

The Judgedom is a least developed country, with a GDP of $1.1 billion and a GDP per capita of $5,065. Prior to the Great Europan Collapse, the islands were seeing a rise in tourism but this has halted. Trade primarily takes place with the countries to its east and south and Akwisia, despite it being a protectorate of Tagmatium. Fishing, logging and sheep farming are the largest economic activities, along with some iron and coal mining. The surrounding seas are thought to have some oil and gas, but there has been no attempt to extract it. On the wurld stage, the Hexanesa are islolated. It is not officially recognised by any of its neighbours, as Tagmatium has threatened both diplomatic and economic repurcussions on those that do. However, the Volsci have given limited diplomatic recognition. 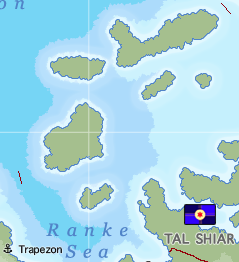 The islands have a sub-artic climate, although the southern-most island of Skhronos is the warmest. Life on them is marginal at best, as the harsh climate and short growing season means that only the hardiest of crops tend to flourish. They are low and swept by winds blowing from the Argic Circle. The main resources are the pine forests and the herds of caribou that live in them, as well as fish and animals hunted for their fur. There is very little agriculture in this part of the wurld. The settlements that do exist are on the coasts, around natural harbours or clustered around the walls of the numerous fortifications that have sprung up over the years. The islands are quite geologically active, which does mean that geothermal heating has begun to be exploited, but the fact that they are poor and relatively marginal means that they have not had the level of investment needed to truly profit from it.

Until the 4th Century, the Hexanesa were very rarely touched upon by either of the two largest civilisations that dominate northern Europa – that is Aroma and the Volsci. They were at periphery of the conflict and, at best, were merely way stations for raiders going one way or the other. The Buranic Invasions of the 4th Century came that way, and the Volsci encouraged it. At some point, prior to the 5th Century, the people who would become the Akwisians would detach from Deltannia and leap frog down the islands, conquering as they went, until they settled in what is now Akwisia. There, they raided Aroman lands and occasionally meddled in the politics of the Empire.

In order to finally remove the threat of continued invasions from Thelarike, Aroman forces during the reigns of Demetrios III (CE630 – 651) and Arkadios I (CE651 – 669) conquered the islands, bringing with them the light of Christ and civilisation. Over a period of almost forty years, they drove out the forces of the Fisher King and crushed the local polytheistic religion, deriding them as animal-worshippers. The small local Christian enclaves were regarded with suspicion, as they had lived in harmony with the pagans. These were uprooted and sent south, to live on the borders at the other end of the empire.

The success of the conquest led to the general Konstantinos Bonakes toppled Arkadios and set himself upon the Leopard Throne in 669.

There the six islands remained as Aroman garrisons on the edge of the empire, holding the barbarians at bay. At times, the Thelarikeans were able to wrest the islands from the control of Aroma and at others, they were taken back. At others, the islands were taken by the Volsci. Sometimes, they were even ruled as a condominium – the islands were jointly administered with what little tax income from them being split evenly between the otherwise opposed empires.

It wasn't until the dynasty of the Kekaoumenoi (1793-1956) that the islands were finally, permanently in Aroman hands.

In the reign of Khristoforos X (1924-1939) things started to unravel. The Six Islands had been something of a cultural melting pot, despite their marginal nature. They were at the edge of two great nations and the rules of the centre did not hold as much sway. At times, one nation did provoke the other, but usually it was ignored. But in 1931, Khristoforos allowed himself to be caught out. He was not only provoked by the usual Volsci actions, but escalated and drove the Volsci locals out. This wasn't using the garrison but by whipping up nationalistic and religious hatred of the local population and it ended in a bloody pogrom. This was met by outrage from the Volsci and the situation deteriorated further, until the summer of 1932 when an Aroman minesweeper was sunk by a Volsci destroyer.

The Long War started and did not finish for a generation.

A long story short, the general Leon Theonikos overthrew Konstantinos VIII, Khristoforos' brother and murderer, during a military parade. Tanks opened up with their coaxial and hull machine guns on the imperial grandstand. Although on paper Tagmatium had won, the garrison was withdrawn from the Six Islands. Elements who had made their home there and shed their blood there during the Long War revolted and the withdrawal became a rout. Since then, they had remained a sore point between the two nations, as an independent realm between them. The Navarkhokrateia was much more friendly to them than the regimes before and after, and they even cooperated to crush a Communist uprising in Akwisia. The main sticking point, however, was the fate of the garrison who had remained. Even Theodosios VI refused any talks of reunification unless the erstwhile garrison was tried for desertion and murder.

The islands are one nation and as a republic, governed by a Great Judge (Laimiaic: Megas Krites) elected every six years to act as the head of state for the islands, and as chairperson for the council that rules them. Each of the island forms a Judgedom (Laimaic: Kritakrateia) headed by a Judge (Laimiaic: Krites, plural Kritai), who sit on the Council of Judges (Laimaic: Synderion tes Kratai) headed by the Megas Krites. These combine both the executive and judiciary for each island, and are a form of emergency rule that has solidified into the permanent government. The Council of Judges and the Megas Krites are aided in the running of the nation by Ministers (Laimaic: Logothetes) appointed to head government departments called Logothesion.

The main sticking point in relations between Tagmatium and the Hexanesa the past has been the fate of the soldiers who stayed behind after the Long War. Due to the chaotic manner in which the Aroman forces pulled out and the fact that roughly a quarter of them wanted to remain, they have often been charged as deserters and even murderers, as there were some brief gun battles as the Vigla, the military police, as they attempted to arrest those who stayed. These charges remain on the books of Tagmatium and are against people considered by the Hexanesanoi as heroes and founders of their nation. The relations have, however, ebbed and flowed - they were strained during the Navarkhokrateia but much warmer when Theodosios VI was on the Leopard Throne. They have become much cooler when Kommodos III was elected.

The military of the Hexanesa is small and rather underfunded. It consists of two parts, a combined green-water navy and coast guard called the "Stolos" (Laimaic: "Fleet") and a small ground defence force that runs a treble duty of a gendarmerie, civil police and border guard, the Taxiotai. Much of their equipment is locally-produced copies of what their grandparents used during the Long War. The air force is non-existent as a separate arm but both branches maintain aircraft as support elements - mainly in reconnaissance, observation and search and rescue roles.

This represents an almost complete pull out of the Aroman military and the police merging with the deserters and being forced to fulfil the roles of a border guard, defence force and civil police.

The islands are not rich. The Hexanesa has a GDP of $1.1 billion and a GDP per capita of $6,065, making it one of the poorest nations on Eurth. In the past, they had been used as whaling stations, although that was destroyed by over-exploitation long before the industry itself was made redundant by technological developments. Now, they mainly rely on a combination of fishing, logging and sheep rearing, with some exploitation of the mineral wealth of the island but this is purely for local needs. There is a tourism industry, with visitors coming to see the scenic landscape of the islands but it is hampered by the generally poor state of northern Europa.

They are majority Aroman Christian, and some holding polytheistic beliefs from before the southerners started to meddle. Due to the pogroms under Khristoforos X, there are very few adherents to the Volsci ways left in the Hexanesa left and they are mainly recent immigrants or foreigners resident in the islands.

To further muddy the waters, the hierarchy of the church should be appointed by Aroman emperor but due to the rift, this has not happened. They have been making their own appointments, and the Aroman Church has been making parallel appointments to those positions. They are grouped as a diocese of the Patriarchate of Trapizon and still consider themselves as such. There have been moves to break away but this is currently considered a step too far. These will be major issues that need to be resolved, both for Tagmatium and the Hexanesa before good relations are restored.