The Kingdom of Koku is a very large, devout nation, notable for its compulsory military service. Its compassionate, hard-working population have some civil rights, but not too many, enjoy the freedom to spend their money however they like, to a point, and take part in free and open elections, although not too often. 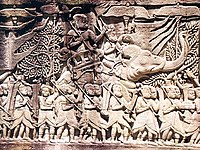 The large government juggles the competing demands of Education, Law & Order, and Religion & Spirituality. The average income tax rate is 33%, but much higher for the wealthy. A powerhouse of a private sector is led by the Pizza Delivery industry, followed by Automobile Manufacturing and Information Technology.

Minority children spend hours bussing to schools miles away from home, voting has become a nightmare since everyone keeps selecting "None of the above", child labor has been outlawed, and meat-eating is frowned upon.

Roads are often backed up with round-the-clock construction crews., drug distribution is tightly controlled by the government, CDs are regularly copy-protected, and skateparks can be found in every city.

The government is spending millions on renovating the public transportation system, the upper class have been throwing riots after hunting was recently banned, the mining industry is making inroads into environmentally sensitive areas, and only "organics" are permitted to be citizens.

Crime -- especially youth-related -- is well under control, thanks to the all-pervasive police force and progressive social policies in education and welfare. Koku's national animal is the elephant, which teeters on the brink of extinction due to widespread deforestation, and its currency is the koku.

The elephant is a symbol of huge strength and stature, wisdom and courage. In heraldry, it is a very appropriate bearing for those who have distinguished themselves in the Orient.

Retrieved from "https://iiwiki.us/mediawiki/index.php?title=Koku&oldid=221480"
Categories:
Hidden categories:
This page was last edited on 24 June 2020, at 12:57.
Privacy policy
About IIWiki
Disclaimers