The Kingdom of Jaihu is a proud nation of hard-working simple people who enjoy being ruled by a benevolent leader. Any outside interference with internal affairs is severely frowned upon.

Emblem of the Golden River civilisation.

Jaihu is located in the central plain near the Golden River or Jin Hé River. Most archaeologists consider the site to be one of the earliest examples of the Oriental culture. Archaeological evidence shows early settlement around 7000 BCE. At one time, it was "a complex and highly organized Neolithic society," home to at least 350,000 people and perhaps even 800,000. The Golden River flooded many sites, which were often rebuilt and typically featured a large moat surrounding the settlement. 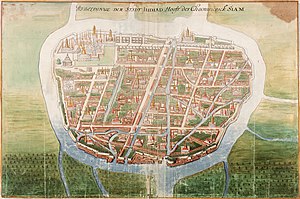 No one but King Vajaihancha XIV the Great knows the complete details of the birth of our country and this is the way that the Supreme Jaihuian Council wishes it to stay. There has been much rumour and conjecture in the foreign press that King Vajaihancha XIV the Great became the Grand Pooba of Jaihu through a complicated series of bizarre gardening accidents... Let me assure you that this could not be further from the truth.

King Vajaihancha XIV the Great tells us that the Jaihan people are an ancient and noble race that came to the Eurth in the belly of a giant fire breathing dragon. This is accepted as fact. His Royal Jaihuiness further tells us that he was chosen by this giant fire breathing dragon to be our Glorious Leader before time itself. This is also accepted as fact. In conclusion, King Vajaihancha XIV the Great tells us that we should show extreme indignation to those who would suggest that our Magnificent King is in his position due to a series of bizarre gardening accidents as we are a people with Great knowledge of agriculture and that, my friends, is no accident.[1]

Rising from tribal disputes instigated by Buran raiders Empire, the Golden Kings of Jaihu conquered what is now Qardania along with much of the northern Orient, forcing the Shakyan principalities west of the Jasmine Sea.

By 1000 BCE, the Jaihan had developed complex religious beliefs. They prayed to many gods and nature spirits, who brought plants and animals to Eurth. They also believed that great gods could not hear the prayers of simple mortals. So they prayed to their ancestors. The Jaihan believed that only powerful spirits like the spirit of a king or noble could contact the gods. That’s why they made sacrifices like food and other necessities. At first only the royal family had ancestors important enough to influence the gods, but eventually more families shared these rituals. The early Jaihan people believed that their ancestors were in heaven and continues to show an interest in their family even after their death.

The people of the Golden River communicated with a unique form of writing. This system used pictograms and ideograms and signs that express thoughts or ideas. The form of writing used by the Jaihan is one of the most difficult to learn, even after many years of simplifying the characters. This writing style became known as calligraphy or a fine writing art form. Since Jaihu covered such a large area, many parts spoke different language. But since they use the same form of writing systems. The writing styles used today are still the same used since thousands of years ago but developed in each place in its own way. 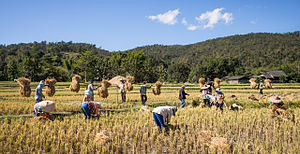 Jaihu is one of the largest rice exporters on Eurth.

The inhabitants of Jiahu cultivate foxtail millet and rice. While millet cultivation is common in the Oriental culture, rice cultivation at Jaihu is unique and supports the theory that Jaihu was a separate culture from the Oriental grouping. A difference in the local climate, moisture and soil conditions has made cultivating rice more difficult. Jaihu rice cultivation is one of the most commonly found, and the most northerly found. The rice is a kind of short-grained japonica rice. Scholars think the earliest domesticated rice belonged to the long-grain jindica subspecies.

Jiahan people enjoy good health. The average life expectancy is around 80, representing a superb life expectancy. Burials in Jaihu are accompanied by burial offerings. Burial objects range from pottery to tortoise shells. Burial offerings vary between individuals and are linked to the skills they displayed in life, providing evidence of an early specialisation of labour. The labour specialisation, from most common to most rare, includes farmers, herdsmen, fishermen, hunters, potters, musicians, and a tribal priest.

The native language is Jaihuian, although Anglish, Oharic and Yebru are spoken and understood by the majority of the Jaihuian people.

Jaihan are interested in exchanges in sports. The people enjoy playing cricket, handball and football.

Retrieved from "https://iiwiki.us/mediawiki/index.php?title=Jaihu&oldid=443067"
Categories:
Hidden categories:
This page was last edited on 3 January 2022, at 15:08.
Privacy policy
About IIWiki
Disclaimers