Ngoc Luat, officially the Nationalist Republic of Ngoc Luat (NRNL; Lamian: Cộng Hòa Dân Quốc Ngọc Luật), is a country in Southeast Alharu, sharing a maritime border in Adisi Ocean and Adlantic Ocean due to its geographical location, neighboring the Republic of Rhava to the north. The country covers around 157,700 square kilometers, the country is divided into two portions, the mainland (around 125,000 square kilometers) and the Thuy Luc Island (around 32,700 square kilometers).[3] The capital is Gia Dinh, other major cities include Lam Hong, Quang Dong, and Dai Bac.[4] The sovereign state of Ngoc Luat has a population of around 37.2 million. Luật Giáo is enshrined in the constitution as the official state religion and is practiced by more than 97% of the population.[5]

In the early 1980s, Ngoc Luat entered a period of rapid economic growth and industrialization called the "Miracle on the Lam River".[6] In the late 1990s and early 2000s, Ngoc Luat transitioned from a one-party military dictatorship to a multi-party democracy with a semi-presidential system.[5] Ngoc Luat's export-oriented industrial economy is one of the biggest on Eurth.[7]

The government of the Nationalist Republic of Ngoc Luat was founded on the 1946 Constitution of Ngoc Luat. In the constitution, it states that the Nationalist Republic "shall be a nation that is bound by the nationalism of Ngocluatians, democratically voted by the Ngocluatians."[8] It underwent significant revisions in the late 1990s, known collectively as the "Bản Sửa đổi Quốc gia" (National Revision). The government is divided into four branches (Viện): the Executive Assembly (Viện Điều Hành, cabinet), the Legislative Assembly (Viện Lập Pháp, Congress or Parliament), the Judicial Assembly (Viện Tư Pháp), and the Control Assembly (Viện Kiểm Soát, audit agency).

The head of state and commander-in-chief of the armed forces is the president, who is elected by popular vote for a maximum of 2 four-year terms on the same ticket as the vice-president. The president appoints the members of the Executive Assembly as their cabinet, including a prime minister, who is officially the President of the Executive Assembly; members are responsible for policy and administration.[8]

The main legislative body is the unicameral Legislative Assembly with 500 seats. Three hundred and fifty are elected by popular vote from single-member constituencies; One hundred and twenty-five are elected based on the proportion of nationwide votes received by participating political parties in a separate party list ballot; Twenty-five are elected from members of the Dong Hai constituencies. Members serve four-year terms.[8][9] 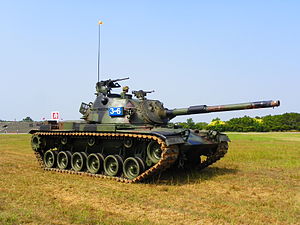 Today, Ngoc Luat maintains a relatively small but experienced and technologically advanced military, mainly as a defense to foreign and external threats using the National Defence Law of The Nationalist Republic as a pretext. This law authorizes the use of military force when certain conditions are met such as the dangers of losing the nation's independence or foreign military interventions.[13]

Control of the armed forces has also passed into the hands of the civilian government. As the Ngocluatian military shares historical roots with the Nationalists Faction, the older generation of high-ranking officers tends to have a nationalistic ideology when it comes to military-related topics.[14] However, many have retired and there are many more Ngocluatians enlisting in the armed forces in the younger generations, so the political leanings of the military have moved closer to the public norm in Ngoc Luat.

As of 2012, the armed forces of Ngoc Luat number approximately 120,000, with nominal reserves totaling 2.1 million as of 2015. Conscription remains universal for qualified males reaching age eighteen, but as a part of the reduction effort, many are given the opportunity to fulfill their draft requirement through alternative service and are redirected to government agencies or arms-related industries.[15] Current plans call for a transition to a predominantly professional army over the next decade. Conscription periods are planned to decrease from 14 months to 12.[16][17]