Ceris is an island located in the Adlantic Ocean. It is bordered by the Dolch Sea and Argis to the north, the Qingming Sea to the west, and Seylos to the east.

Ceris is notably overpopulated, with famine, disease, poverty and conflict becoming ever more rampant, though international efforts following the Sentist War are working to end this, Ceris remains a region with low living standards, and migrations from the island are common. 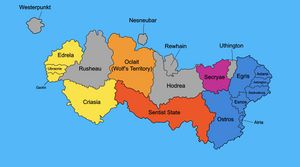 Ceris is home to over a dozen nations, many of which are part of either the North Adlantic Union or the West Ceris Federation.

Nesneubar and Westerpunkt are not located on mainland Ceris, however are generally considered to be Ceriser countries.

The Sentist State controls a large portion of Ceris, however is internationally unrecognised, as it is designated a terrorist group, and is responsible for the Sentist War.