Th﻿e Grand Duchy of Soreana is a small, peaceful constitutional monarchy located on the shores of the Ygros Sea of the continent of Alharu. It has been ruled by the Zaffino family since the mid-1500's. The current Grand Duchess is Caterina Zaffino.

The Duchy and by extension, the city it was centered on were both established in 1576 by the Zaffino family. They originally hailed from Limonaia but the trading patriarch of the family had seen a pristine shoreline with a natural deep-water port. Over the subsequent 200 years, Soreana became a maritime trader state, focused on trading its wares abroad and returning home with the most exotic items anyone could find on Eurth. As Soreana's fortunes grew, the wealth Soreana was generating made it a target for expansion by Limonaia.

In 1758, the Kingdom formally annexed into that nation's growing realm. It was agreed that the Zaffino's would continue to rule Soreana in the name of the Crown in exchange for one-fifth of the Duchy's income as an annual tribute. The Dukes and Duchesses of Soreana would expand further into the fertile interior, increasing its agriculture and wine production, over the next century. The current borders of the nation were defined by 1858. The Duchy was not involved in the brief 1902 Limonaian Civil War.

In 1939, the then-seat Government decided to relinquish their hold over Soreana. With independence, Soreana's economy rose. Both Limonaia and Soreana had signed a mutual agreement on trade, diplomatic recognition and a range of other multilateral statements to maintain their historical ties, even if the two were separate. These treaties were indefinitely suspended during the rule of Luca di Ortello and restored with the return of the Limonaian royal family in 1976. Today, Soreana and Limonaia maintain friendly relations and their partnership has allowed both to see a renewed spirit of cooperation in terms of tourism and technology.

Soreana is the capital and largest city of the Grand Duchy bearing its name. It was founded in 1576 as a trade port, utilizing the deepwater port located there. Over the centuries, it has become a city of great beauty and many canals. The city is divided into the Old City, still within the confines of the old walls, and the more modern 'New City' located primarily on the land surrounding the seaport. At the center of the older contingent of the city, is the Altar of Fire, the nexus of their variation of (Y religion). The seat of power for the Zaffino's is the Soreana Castle, located on an island (connected by a marble bridge) on the edge of the Old City and makes up a segment of the Old Wall. Meanwhile, in the New City, there are a number of taller buildings, though none as tall as the spire of the Cathedral nor the highest tower of the Castle. Its jetties are filled with sailboats and foreign yachts. Outdoor cafes can be found abound across the city. The only railway line, built in meter gauge, in the whole of the country departs from the small station located on the outskirts of the city and runs all the way to (location A). Soreana also hosts an airport located 20 km to the southeast of the city limits. 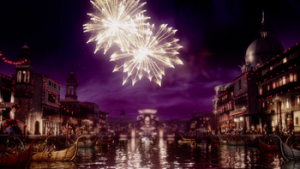 The Festival of the Sun

Recreationally, Soreanans greatly enjoy sailing, playing football, and for some, the thrill of racing in their imported Prymontian and Limonaian sports cars through the streets of both Soreana and throughout the countryside. They also love to be entertained. Solsaliente, the nation's premier touring theatrical circus group, has kept people of all ages amazed for over twenty years. In more recent years, the group has expanded its exposure to other countries. Soreanans also like a good festival: three are important, one acknowledging the importance of the sun, the second is the Annual Regatta, and lastly, the Soreana Grand Prix.

Soreana's economy is focused on tourism (both through encouraging people to visit Soreana's Old City, and the warm temperatures and relaxing waters found further down the coast at Sirena. Since Limonaia and Soreana reaffirmed the 1939 Agreement, both nations have put resources into alternative energy generation and distribution, primarily on solar generation. The most notable company, Helios, is preparing to construct the Duchy's first solar power plant, producing up to 5,000 MWh. Agriculture and fishing rounds out the major economic sectors. 30% of the available farmland is used to grow olives and grapes, for oil and wine respectively. The remainder is geared towards food production, the excess sold to Limonaia. Fishing has become an increasing challenge with fisheries dwindling in populations, forcing fishermen to go further for catches, and potentially trespass on other claimed fishing grounds.

The Grand Duchy is protected by the Soreanan Royal Guards, led by Captain Pietro Spada. It numbers just 25,000 men. They are also the national police force. Under the 1939 Agreement, Limonaia is responsible for safeguarding Soreana's airspace. The Royal Guards primarily serve as soldiers in an army capacity but a contingent act as the coast guard, operating 3 Patrol vessels, a number of smaller survey craft and a dozen helicopters.

Retrieved from "https://iiwiki.us/mediawiki/index.php?title=Soreana&oldid=204111"
Categories:
Hidden category:
This page was last edited on 11 May 2020, at 14:01.
Privacy policy
About IIWiki
Disclaimers