Ulfheimr is a tribal oligarchy of independent tribes guided by a god-king erilaz. It lies to the east side of Argis. Ulfheimr is a largely rural nation. It covers an area of 334,500 square kilometres and is home to 30 million people spread out in tribes in the country. Ulfar is the largest city and the spiritual and govermental centre for the country, housing the Erilaz and his family.

Ulfheimr has a rich culture, much of the ancient history is lost as it was written on perishable materials. It is instead passed down by oral tradition. The Ulfans are the original natives of the land and do not eagerly welcome outsiders. Each of the tribes claims lineage to a god or jotnar.

The country is very isolated, but the erilaz uses his ravens, a task force dedicated to learning about the outside world, to bring back to him new ways and information. The nations many industries are often monopolized by various tribes, enforcing the need for trade and cooperation, or instead fostering jealousy and war. Various tribes are working hard to update their technology to modern standards. The country is known for its non-judeo christian morality system, and its open distaste for the religions in general. Ulfheimr is a heavily pagan and occcult country. The populace vehemently believes in their gods and concepts such as magick.

The nation of Ulfheimr consists of a Taiga, rolling hills, plains intersected with rivers, and a sliver of mountains to the east. The country has several islands held tightly by the tribe of Farmadr. It has short summers, long winters, and sporadic forest fires. The country is heavily irrigated thanks to the efforts of the tribe of Brunnr and is covered in extensive grasslands.

Ulfheimr has a subarctic climate with very large temperature range between seasons. −20 °C (−4 °F) Would be a typical winter day temperature and 18 °C (64 °F) an average summer day, but the long, cold winter is the dominant feature. The growing season, when the vegetation in the taiga comes alive, is usually slightly longer than the climatic definition of summer as the plants of the boreal biome have a lower temperature threshold to trigger growth than other plants. The longest growing season is found in the smaller areas with oceanic influences; in coastal areas, the growing season of the boreal forest can be 145–180 days. Ulfheimr experiences relatively low precipitation throughout the year, 39 inches annually, primarily as rain during the summer months, but also as snow or fog. Snow may remain on the ground for as long as nine months in the northernmost extensions. As evaporation is consequently low for most of the year, annual precipitation exceeds evaporation, and is sufficient to sustain the dense vegetation growth including large trees.

Ulfheimr is a Tribal Oligarchy in which the twenty tribes are run independently by their Jarls without further government oversight. Kromeus Dauthaaeta is Erilaz, chosen of Odin, of Ulfheimr. In times of crisis he unites the tribes, otherwise he keeps track of daily affairs and handles communications internationally. The Jarls rule their tribes in absolute authority and titles are passed down to the closest male family member. Any member of the populace, if unhappy with the Jarl, is allowed to rise up and kill their leader in Holmgang and take his place, if he doesn't die first. Therefore it is in the best interest of the Jarl to keep in touch with his people's spirit. The berserkergang is outside the law of any save the Erilaz, and even then they can challenge him to Holmgang.

Ulfheimr is divided into 21 tribes. These tribes are overseen by the Jarls and claim lineage from a god, goddess or jotunn. Jarls are responsible for the provision of services such as road construction, tribal trade, education and relations.

Ulheimr is a strongly isolationist country and avoids interactions in the affairs of others if it does not affect them. Ulheimr has had enough contact with outside Christian sources to know they despise the faith. But they also realize the necessity in growing and modernizing fully in a world that will leave them behind. All international affairs are approved through the Erilaz first. The Ulfans have a violent desire for liberty, and will react poorly on any attempt to change them. There are many practices within the country that may be seen as alien or horrific, such as animal sacrifice and the letting of blood for divination.

File:Viking with Magnum Dong.jpg
Many Ulfans are a mixture of modern and traditional equipment, save for the cream of the crop.

Ulfheimr has no official standing military as of yet, but their military can nevertheless be divided into several categories. Every tribal village has the traditional raider and warrior, these are the village people. Starting at the age of 13 every man is expected to go on at least one battle with a senior member before the age of 18. They are put through a training course first, and if they survive they are given an arm band and pledge allegiance to the Jarl and the Erilaz. The villages are often a mismatch on traditional and modern gear, focusing primarily on the acquisition of weapons before any other modern military amenity. Those within the city of Erilaz are far more likely to be fully outfitted. Tribes may have access to a handful of tanks or apc's that were manufactured by another tribe or salvaged together. These tribes like Farmadr are turning their resources to production for what they feel is a coming Ragnarok to their lands from elsewhere, and have been steadily building a supply of warships.

The others are the berserkergang, separated into Berserkers, Ulfhednar, and Svinfylking. Berserkergang is a terrifying sight to behold. Commonly, this state caused warriors to go into a state of hysteria and frenzy so extreme that they couldn’t differentiate friends from foes. They would cut down any living thing in their path without remorse – often while engaging in other terrifying behavior. Many accounts of Berserkers speak of their tendencies to bite at (and even eat) the metal at the edges of their shields or guns. Reaching the berserkergang state was considered a rite of passage into their cult world. Men would train in the woods for years to become worthy enough to join the ranks of the elite. They braved the code, adopted the habits of their patron animal, and drank the blood of wolves, hogs, and bears.

Gropmold dutifully digs for the many materials in the mountains that sustain Ulfheimr.

Despite the seemingly constant tribal tension, Ulfheimr is a very productive nation. Each tribe has learned to specialize in their production and partially ensure their own safety by forcing their neighbors to trade with them rather than to gain their riches through force. With the silent hand of the Erilaz guiding them from the shadows, the tribes had grown to power nearly equally. This ensured that they could continue to produce their product, which gave them the wealth necessary to defend themselves and to continue their work. Tribes Like Bjart-Loss are essential to Ulfheimr through their production of electrical products. Others like Farmadr are turning their purches internationally in order to build a modern naval fleet and benefit all of Ulfheimr. By becoming masters at their own forms of modern production, the tribes have made themselves invaluable to each other. While they have not yet opened full trade with the world, they have such products to offer such as slaves, mercenaries, guards, drugs, beautiful artwork, native wood and fruit and meat, unique fauna, unique fauna such as Lycan shepherds, and their own sources of metals and materials that the taiga is rich in.

The country's agricultural industry is primarily for medicinal purposes, external trade, alcohol, or for cattle as the populace subsists primarily on a diet of meat, organ meat, and dairy. Plants that are grown or farmed include blueberries, starwberries, foxberries, cranberries, whortleberries, crowberries, briars, raspberries, Blackberries, cloudberries, reindeer moss, and pine nuts. The Brunnr tribe uses greenhouses to grow vegetables that cannot tolerate the cold well, in addition to large swaths of wheat, rye, and barley. 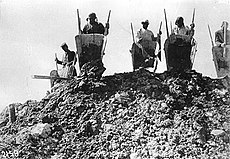 Ulfheimr has used slavery for centuries

Much of the hardest labor is done by captured slaves, but not for lack of laziness. This allows the free ulfans to pursue other labors that will benefit them, in addition to pursuing their crafts or spirituality. Each tribe produces first for themselves, and uses the surplus to trade for what they need or want.

The entirety of Ulfheimr has access to basic necessities such as electricity, water, and even internet. Computer and cellphone usage is becoming more popular as smuggled pieces of technolgies were taken apart and reverse engineered. Power lines are typically buried within PVC pipes. The energy is generated primarily by coal and oil. Ulfheimr has been making advancements in Nuclear technology primarily due to the involvement of Hroptyr Yrungr who is credited with the discovery of Rjistlos (nuetrons). 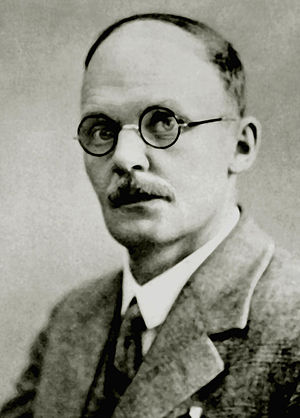 Healthcare is very traditionally rooted in folk medicine and the plants of Ulfheimr. Certain tribes have taken clues from the outside world and have learned to extract the necessary aspects of certain plants and encapsulate them in gel. The internet has become an invaluable tool for Ulfans to learn how to modernize their folk medicine. 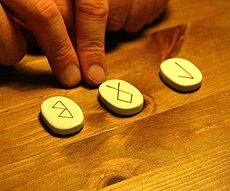 Runic divination is an important aspect of Ulfan faith.

Ulfheimr is almost entirely of the Odinnic faith, with varying degrees of belief. The religion is characterized by primarily several aspects: Ancestor veneration, worship or veneration of the gods/jotnar, belief in occult forms of magick. There is a strong belief that through sheer willpower, one is able to change the world around them, or even ascend to godhood. Much of the population writes with Elder Futhark, Younger Futhark, or Futhorc, and consequently uses the letters for divination or the casting of spells. Occult beliefs are gender specific as well. Men partake in Galdr, and women in Seidr. Men practice Galdr by throat singing the runes or spells in a deep voice that will often damage the vocal cords until they become resistant to the practice. The women sing for their seidr in their native language or to the names of the runes to either bless or curse. Ulfans will often inscribe their weapons and homes with staves, magickal inscriptions, or bindrunes. It is the belief that ones own individual deeds matter the most, and one is beholden to their word. To break one's word, to be a coward, or to betray a tribe is seen as some of the worst sins.

While many tribes claim lineage from a specific god or jotnar, this does not prevent them from honoring or working with another god. Berserkers, regardless of tribe, answer to Odin for their frenzy. The gods are as specialized as the tribes.

In Ulfheimr, it is the responsibilty of the parents to provide education to the children, along with the rest of the village. Education consists first of survival. How to use weapons, how to identify plants and animals, how to kill man and animal alike. They are taught their culture, history, and spirituality. They will be taught their language, english, and standard math and science. The education will then diverge based on their life. Gratablod teaches their women social sciences, and Groa focuses on biology and psychology. Kunnagr is famous for the wealth of knowledge it teaches, and has several schools accessible by any tribe willing to pay.