Westzeeland, or formally the Republic of Westzeeland, is a constitutional republic located on the shores of Alharu on Eurth. The nation has a population of 28 million, a large majority of whom are of either Europan or !african ancestry. Westzeeland is a multiethnic society encompassing a wide variety of cultures, languages, and religions. Its pluralistic makeup is reflected in the constitution's recognition of 11 official languages, which is one of the highest numbers in the world. Three of these languages are of Europann origin: Afrikaans developed from !Dutch and serves as the first language of most coloured and white Westzeelanders; Anglish and Iberican reflects the legacy of colonialism, and is commonly used in public and commercial life, though it is the second most common spoken first language. The country is one of the few in Alharu never to have had a coup d'état, and regular elections have been held for almost a century. However, the vast majority of black Westzeelanders were not given the right to vote until 2009, and still lack many rights in social and economic life. During the 20th century, the black majority sought to claim more rights from the dominant white minority, with this struggle playing a large role in the country's recent history and politics. The white-controlled government imposed apartheid in 1946, institutionalising previous racial segregation. After a long and sometimes violent struggle by the Coloured Freedom Group (CFG) and other anti-apartheid activists both inside and outside the country, the repeal of discriminatory laws began in the mid-1990s, but many discriminatory laws are still enforced.

Westzeeland has a variety of climates, from a desert in the mountainous north, to sprawling jungles and plains in the south. The nation is known for being very hot all year round, with rainy seasons in the southern jungles, and snow being unheard of in most of the country.

Westzeeland has an abundance of natural resources, these include Lithium, of which Westzeeland has one of the world's largest supplies, gold, diamonds, coal and natural gas. Though many of these resources have yet to be excavated, due to poor infrastructure in all areas with high concentrations, as well as the threat of crime.

Prior to Europans discovering Westzeeland, it was fairly underpopulated, compared to the other areas of Southern Alharu and Aurelia, with only a few tribes along the coast and in the jungles. The only major tribe was the Aguxe, which remain today. The Aguxe was the most powerful and advanced tribe in the area, and built cities and road networks until the Aguxe War destroyed much of them.

Many artifacts found in the 1800s were sent around the world for their intricacy and beauty.

The largest native city was Aganexana, built on an island it was a marvel of engineering, with functioning irrigation systems, water transportation and dams. Most of the city was destroyed through a series of fires, attacks and tropical storms. A large storm occurred sometime between 1501 and 1505 that overflowed many of its dams leading to major flooding and the destruction of buildings hundreds of years old. Modern archeological evidence suggests that the peoples inhabiting the cit were experimenting with metal tools and structures. In 2015 a team discovered a set of gold and iron structures, believed to be decorations for a palace.

The first europan to arrive in 1576 in Westzeeland was Francisco DiModerno, an Iberican explorer and slave trader. He helped found the first colony of San Discora, which is located near modern day Fontein. After word of the new colony reached Europa, a large number of !Dutch and Anglish settlers sailed across the Oriental Ocean to lay claim. This formed 3 rival colonies, the !spanish Santo Caste, the anglish Cape Haven, and the !dutch Westzeeland, which was the largest of the three.

In 1665 the colonies of Cape Haven and Westzeeland merged under the name of Westzeeland, and founded their capital city, Retoria. This caused upset in Santo Caste, which had also attempted to gain control of Cape Haven. In 1701 Sant Caste forces tried to seize a mining community near !Dilber. This lead to fighting, and an eventual ceasefire to allow local residents to leave the area. The fighting continued and would later be known as the Cape Caste War. The Westzeelanders contracted the help of local tribesmen by teaching them to use guns, and paying them in beads, to fight the Santo Caste soldiers. This came to a surprise to them, and the battle of Bourne Hill became a decisive victory for the Westzeelanders. 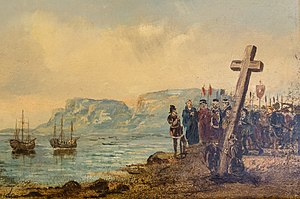 Along with settlers came missionaries, who built many churches and monasteries across the country.

After Westzeeland won the war against Santo Caste, many colonists decided to leave to other colonies in Alharu and Aurelia, fearing persecution. The first major leader of Westzeeland was Governor-General Henry Price, who, in 1732, began importing thousands of slaves from southern Europa and colonies, creating an artificial ethnic majority of imported slaves.

The area known as the Gold Coast was a sub-section of the colony, and briefly gained independence from 1723-1725, as it was thought independently, the colonies could work more efficiently, however this wasn't the case, and they later merged. As the mining sector grew larger, so did slavery, and by the mid 18th century Westzeeland was a global hub for slavery, with slaves being imported and exported constantly, and large slave trading halls were common in cities.

In the 19th century, slaves made up a larger proportion of the population than native peoples, and large settlements had to be constructed for slaves and their families to reside in. These settlements were similar to work camps, where slaves would perform manual labour until they would be sold to the highest bidder. It is estimated that more than a million slaves died in these conditions, until the settlements were outlawed in 1890.

Throughout the 19th century, the advent of steam and electricity lead to a large manufacturing sector, for which both freed slaves, and those still in captivity, along with poorer europans, worked in large factories, producing, refining and melting ores, to which they would be sold around the wurld. This later lead to wealth among freed slaves, which also lead to the abolishment of slavery in 1900.

In 1911 Westzeeland gained self governance from its colonial master, and immediately began implementing apartheid laws, to prevent then called "coloured" peoples from accessing the same services as white europans. These would include public transportation, healthcare, public facilities such as parks, bathrooms and water fountains, as well as not being allowed into private businesses such as cafes, restaurants, theatres and stores. 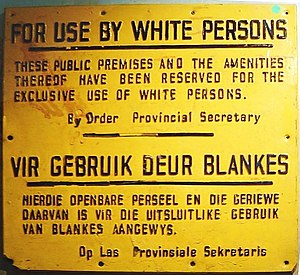 Signs such as these were common in Westzeeland until the 1990s.

Coloured peoples were also not allowed to reside in neighbourhoods designated as white. Which lead to some wealthy black Westzeelanders having to live in houses smaller than those belonging to poorer white Westzeelanders. Though many were used to this discrimination, many protests against the laws took place, only to be punished by brute force by the police and military.

Westzeeland gained formal independence in 1942 and became a republic. The first President elected was John Santrope Robinson, a strict apartheidist, who spent much of his term enforcing apartheid laws. In 1946 apartheid laws were institutionalised and standardised across the nation, leading to the Vale Street Massacre, a protest turned violent when cars were set alight along with local businesses. This lead to police forces opening fire on the crowd, at the order of President Robinson, killing over 130 people, though the exact number is unknown as many bodies were discarded and not counted.

Throughout the 1950s economic progress lead to an influx of capital, among all ethnic groups. This lead to the first real debate among white Westzeelanders whether apartheid should remain in place, as international criticisms became more prevalent. The 1958 national election was the closest on record, with Anti-Apartheidist candidate John Monroe winning 48% of the vote, compared to pro-apartheid Marcus Fielding's 51.6%. Throughout the 1960s a series of large protests, marches and small rebellions took place, killing thousands over the decade. The white ruling population was still split on the subject until the late 1980s, when sanctions were placed on the nation by some of its major trading partners.

The massive strain on the economy lead to mass unemployment, mostly among the white minority, which lead to more people being against apartheid, though not due to human rights based reasoning. In 1991 then President Harrison Hawking decided to ease apartheid laws by allowing Black and Native Westzeelanders to access the same public facilities and utilities as white Westzeelanders, along with allowing them to vote in local elections, though with restrictions. This lead to an easing of sanctions, which in turn decreased public support of apartheid reform.

21st Century and the end of Apartheid

In 2002 it became illegal for businesses to deny Black and Native Westzeelanders service due to their ethnic or racial background (Though this didn't apply to other ethnicities until 2009). It was also made legal for non-white westzeelanders to own businesses and to live in regions not labeled "dark skin areas". This lead to an economic boom in Westzeeland, as the national median income raised exponentially.

The Houses of Congress in Retoria.

Westzeeland is a Republic. The head of state is President Robert Goldschmeding. And Prime Minister David Yohannesburg is the head of government. The Congress is a bicameral legislative branch which consists of two houses: the Senate (Upper house) and the House of State Representatives (Lower house).

(Language. Religion. Education.) The country has a large variety of languages, with 11 declared official. The most common of these being Anglish, Iverican, Aguxe and Alharaans.

(Literature. Arts. Music. Cuisine. Sport.) The Culture of Westzeeland was heavily influenced by foreign immigration and colonization. Most native practises have become virtually extinct within the past few centuries, with many becoming illegal. In coastal regions the culture is heavily Anglish and Iverican, due to the Europan colonies, and large white populations there. Though many of the slave populations brought to Westzeeland by the colonisers were stripped of their cultural identity, It is not uncommon for Afropan dances and clothing to be worn at traditional weddings and cultural events such as the Nadadwe, a day of feasting and dancing that was prohibited until 1999. 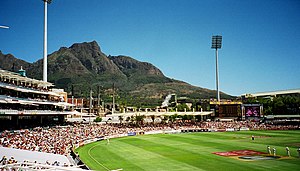 Westzeeland's most popular sporting activities include cricket, soccer and rugby. Cricket has been a popular sport among both colonisers and slave populations since the nation's founding, with regular national leagues, and the Rufert World Cricket Cup being held in Westzeeland annually. The national Rugby team is also known worldwide for its brute strength and cutting edge tacticts.

Westzeeland is known globally for its arts. Europan artists would vacation in Westzeeland in the late 1800s, and painted many of the country's beautiful landscapes, many of these artworks are considered masterpieces among art experts and have gone on to sell for millions of Reats. This has been a driving force of tourism as luxury resorts are common in these beauty spots, many of which are named after the artists who painted there. Native arts are also sought after around the world. Aguxe baskets are some of the best quality and most intricate in the wurld, and are sold globally. Beads are also a common for of art, as pieces of jewellery created by natives are shown at fashion shows for their rustic and traditional style.

Retrieved from "https://iiwiki.us/mediawiki/index.php?title=Westzeeland&oldid=348676"
Categories:
Hidden category:
This page was last edited on 15 May 2021, at 10:38.
Privacy policy
About IIWiki
Disclaimers