The Manamama League is a multinational organization charged with the responsibility of constructing and maintaining the Manamama Canal that lies on the Isthmus linked Alharu and Aurelia. It is also formed with the goal of bringing stability to the area.[1] Originally founded as a bilateral project between the Radiant Republic of the Sunset Sea Islands and the Syndicate State of Synturia as a means to foster both nation's economies and further technocratic ideals, it grew into an entity involving six other nations: Andalla, Mauridiviah, Asgeirria, Shffahkia, Little Flau, and Selayar. With the project expanded to involve a total of eight countries, it gives smaller nations the opportunity to get involved in larger efforts and share in the gains of the canal's outcome.[2] 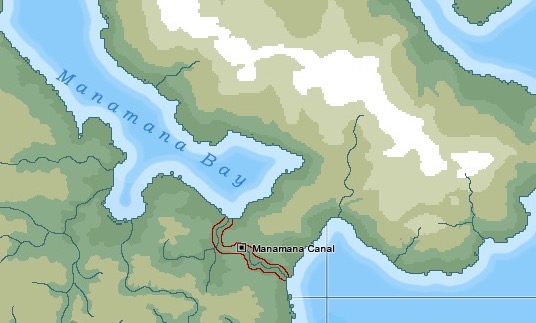 Location of the Manamana Canal.