Selayar (/sə'laːjar/; Heraan: Heraʻā ['heraʔaː]), officially the Monarchy of Selayar (Heraan: Watāhama mi Heraʻā), is a federal monarchy located in northern Aurelia, bordering the Mananama Bay. It is located northeast of Rihan and northwest of Shffahkia. Selayar covers 704,324 square kilometers and has an estimated population of 41,332,005 in 2015. Selayar comprises of 7 ʻArana (state-kingdom), 1 Federal City, and 1 Royal Capital City. Wanavera'a, officially the Royal Capital City of Wanavera'a, is the capital, while Mawura is the largest city in Selayar.

Selayar is one of the most diverse countries on Eurth, owing to its location in the tropics. It's year-round hot and humid temperature along with its dense cover of untouched forests provide habitats for a large number of endemic species. The fertile floodplain on the north supports a dense and bustling population of Selayar, with many rivers flowing through from the Wananga mountains in the east. The floodplain alone hosts an almost three-fourth population of the nation.

Selayar emerged as one of the earliest civilisations in Aurelia, beginning with the rise of Ninaman cultures in early first millennia BCE and the development of rice agriculture. Tenaia Kingdom is widely-recognised as the first major kingdom in Selayar, after uniting the Saraian Valley under its dominion around fourth century CE. The arrival of Shffahkian colonist early in the 1400s brought many novel things to the kingdom, and with it, constant warfare. Only in the early sixteenth century, did Reyan Empire once again united the Valley, and went on an aggressive expansion campaign. The Empire reached its zenith in late 1790, spanning almost all of the southern Manamanan coast and land further inland, matched only by the Shffahkian Empire in the southeast. Selayar, as it is known now, grew out of the Wananan Rebellion in 1850, which shifted the power from Reyan capital Terata to the former vassal of the Empire, Heraa. Selayar once again went on an expansionist campaign, only ended by the Civil War that ravaged the country for more than a decade, starting in 1959, temporarily splitting the country into two governments. Reconciliation and reformation followed the post-Civil War period, though small-scale rebel activity persists. The election of King Manuwesa II as the Tāha is regarded as a transition to a new modern era of Selayar.

The Economic Reform of 1974 is hailed as a breakthrough reformation in the economic sector, as the virtually destroyed economy of Selayar rose up again as the "Tiger of Aurelia" in the late 1980s. Selayar's economy has seen an annual growth rate of more than 7 percent from the late 1970s, and well into the late 1990s. Oil price boom is regarded as the main factor in Selayar's economic recovery, along with the growing industrial base that followed decentralisation of Selayari economy. The annual growth rate has slowed down as the nation entered the 21st century, and with it, a decrease in oil production contribution to Selayar's economy.

Selayar is a member of several multilateral organisations, including Manamana League. There has been a recent talk for the inclusion of Selayar into Aurelian League.

The name Selayar is believed to derive from Old Reyan name for the heavily-populated floodplains in central Selayar, Sarahira Valley. When Shffahkians explorers first entered the region of present-day Selayar, they transcribed the name "Sarahira" as "Saraire". This would later evolve into the present name "Selayar", where today it refers to the country as a whole, not just the area around the floodplains.

The native name in Heraan, Heraʻā, a cognate of Old Reyan name Sarahira, is the namesake of the Heraans and its language, where it used to mean 'valley'. It came from the fact that the Heraan's homeland is the Heraan Valley in Tarema, and later applied to the Heraans land, and ultimately, the nation as a whole which is dominated by the Heraans both politically and culturally.

One of the earliest evidence of human habitation in Selayar was found at the Sidika Cave, where stone tools and human bones were recovered. Dated to 2000 BCE, this is the only evidence of human habitation in Selayar before 300 CE, where ceramics and jars were found on the mouth of Garang River. The Garang culture, named for the river where the culture was located, lasted from approximately 300 CE to 800 CE, where it flourished as the only Bronze Age culture found in Selayar. Bronze tools were found in abundance at the historical sites, mostly composed of agricultural tools. The Garang culture, however, isn't a united political entity. Instead, it's thought that it was composed of many small chiefdoms united merely by its similar culture. No bronze tools or settlement evidence was found after 804 CE, indicating the downfall of the culture. The exact cause of the Garang culture downfall was still heavily debated, with most historians supported the theory where an massive tropical storm struck the island, resulting in the destruction of many houses and wrecking havoc upon the island. Selayar entered a setback in technology and culture after the downfall of Garang culture on the Latanya Island.

According to Babad Torang Siyara, an epic composed at the turn of 18th century, Selayar was divided into 3 city-states and 6 chiefdoms by the time of the rise of King Bhatura the Great.

Rise of the Reyan Empire 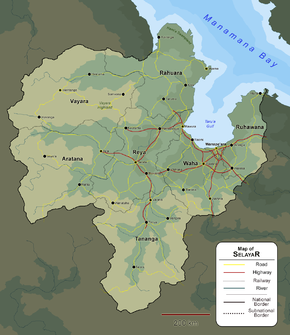 Selayar is a federal parliamentary elective constitutional monarchy. Previously, Selayar was a socialist absolute monarchy, ruled by the Sahaja dynasty. The Sahaja dynasty has been ruling Selayar since the 1939 coup that installed a socialist kingdom and General Dharmasetu Sahaja ascended the Selayari throne. The monarch has absolute power over the nation, and it's the head of state and government of Selayar. Selayar currently has no legislature. In 1969, the democratically elected House of People were abolished because of the civil war. There has been a proposal to restore the House of People back since the Civil War has concluded, but there is no progress so far.[1]

The King has a privy council, called Badan Penasihat Raja (literally Council of King's Advisors), that advised the monarch in its daily activity and is also heading the judiciary system of Selayar. It consisted of 10 advisors, with two advisors elected by each province, two advisors from the monarch family, and the last two advisors from the military. The Council has the right to exercise King's mandate and power, though the King himself could override the Council's decision or replace any of the Council's advisors. The Body is technically the extension of the King himself, and usually are the one who appeared on the public face on behalf of the King. The monarch and the Council members are exempted from the law of Selayar.

The King also has its own cabinet, consisting of the King's royal family. It is technically the executive branch of Selayar, and it is headed by the King and to some extent the Council King's Advisors. Headed by Kamipin Karusan Rania (Chief of People's Affairs), its role is similar to Prime Minister with the exception that it is chosen by the King and usually reserved for the Panaitan Mekatha (Crown Prince)

Selayari law does not permit the establishment of political bodies or trade unions.

Selayari economy has been dubbed as the fastest growing in the region, its GDP has doubled since the civil war ended in 2014. The economic condition has improved over the years. Many new oil fields have operated, and many new concessions are ready to be operated. The steady rise of oil price has helped propped up Selayari economy in many ways, and petroleum-related products make up to 90% of the Selayari exports. Unemployment, however, is still pervasive in Selayar along with poverty level. Unemployment level reached a record high in 2015, almost 25%, due to the repatriation of many civil war soldiers and about 45% of the Selayari population is below the poverty line. Inflation has been kept steady, and reach a record low in 2016.

Officially, Selayari practised a socialist system. Some sectors that involved people's welfare are by constitution to be owned entirely by the government. This includes electricity, waters distribution, transportation system and oil fields. Private companies aren't banned, and all Selayari is free to make his own company. Though by law, the government needs to own the majority of the companies' shares. In turn, the government will subsidise most of the company's expenditure. Only Selayari could own a company, although exemption could be made that foreign companies could own up to 49% of a state-designated company's shares. In most case, foreign companies needed to cooperate with native Selayari to set up their branch in Selayar with government supervision.

The tax rate is progressive, with people that have less than $4000 income per year exempted entirely from paying tax. It reached almost 40% for people who have income more than $1,000,000 per year. Foreign nationals are exempted entirely from tax, but it needs to pay "foreign national tax" for about $1000 per month. Companies are also exempted from tax because almost, if not all, companies are owned by the government.

Historically, Selayari economy has always been propped up by spice trading and fishery. It has been famous for its spice that only grows in Selayari islands, the Butternut, and the source of many other exotic spices. During the 19th century, COLONISER applied 'forced plantation' system and exploit Selayari to only produce many exotic spices. This led to the unproductivity of many Selayari soils later on due to monoculture and extreme use of fertilisers. Nowadays, the agriculture sector of Selayari contributes a little to the economy due to the already-little productive lands being destroyed as a result of 50-years long civil war. Fishery still contributed much to the country's economy, and was the major backbone of Selayari economy and remained the only effective sector throughout the civil war. Its importance has been dwarfed by the rising oil sector, however.

Oil was first found in the location of future Liaknia in 1935, though it could only be extracted in 1941 due to the oil-driven 1938 coup. Selayari oil production gained importance in the WAR, being the only neutral major oil producing nation in the region. In this period, fishery and agriculture still contributed a lot to the Selayari economy. The start of Selayari Civil War in 1967 was precipitated by oil dispute in western Selayari, and it devastated most of Selayari infrastructure, plunging it into a deep recession period.