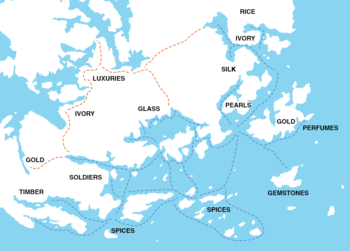 The Pearl Road or Pearl Route refers to an ancient maritime trade network that connected several important parts of southern Europa on Eurth. This long-distance network enabled much greater economic interaction between peoples from Azania, Amutia and the Orient. As a side effect these increased exchanges led to a more unified, shared culture among these nation states.

The Pearl Road was established in the 2nd century CE. Evidence of these movements can be seen in shipwrecks recovered in the Rivdon Bay and Rosario Sea, which contained trade items from faraway regions. It wasn't exactly one single unified trade network, but rather a patchwork of overlapping local trade networks. Nations and city-states along the Pearl Road centred their economies on both sea and land. Indigenous slaves were the backbone of this early pearl fishing industry in the Orient. Trade in the rest of Europa was facilitated through roads and river networks. Roads and rivers could be controlled by different lords, who would then extract tolls from any merchants who used them. No monarch owned the seas or could regulate and tax the sea. So commercial activity began to spread among the common people, unrestricted by the aristocracy.

If you wanted to take part in the Pearl Road network, all you needed to do was build a boat, load what you had to sell, and set out into the sea. The trade route included crossing several bodies of waters skirting the Oriental Ocean and Adlantic Ocean, but not yet into the open ocean. The Pearly gates was an informal name for the strait between Tamurin and Orioni, a term later repurposed by some early Christians.

During the 6th century, due to the social and religious upheaval among the Shakyan Principalities the coastal Sokhainean people were pushed out by the neighbours and fled to the Southern islands of the Peridasei Archipelago, culturally absorbing the native Azano-Marenesian Vahishtoang civilization, thereafter forming the largest ethnicity in modern day Safiloa. 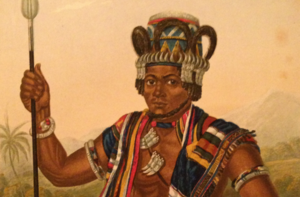 By the 9th century, Ayubi became one of the final links in the Pearl Road. During the 15th century, several Orinese fleets under Admiral Jovan Tafari began raiding along the Pearl Road.[citation needed] This eventually led to the creation of a large Orinese colonial empire, which attempted to supplant almost the entire network. In the mid-16th century, a chartered company managed by Jivanamist Tamurini merchants and farmers established an export-based colony based on sea salt panning, limestone mining, and spice farming on the island of Maleibidulu, after the island had been besieged by a series of plagues and pillaged by raiders several times, which decimated the native Marenesian population. During the 17th century, Iveric refugees sent explorers into the eastern part of the Pearl Road in preparation of their Gran Viatge or the "Great Voyage" towards Alharu.

Clockwise from east to west, this maritime trade route connected: