San Castellino, officially the Republic of San Castellino (Stillian: República de San Castellino) is a large country located in western Mesothalassa in Alharu on Eurth. The country is situated between the Manamana Bay, the Bahia del Trébol and the Baie Ferdinande. San Castellino is divided in two by the plateau of the High-Chanchel, between the Mariachi desert and the equatorial forest. San Castellino has immediate borders with Mauridiviah, New-Lyria, Eldorado and Sitallo. The country covers an area of 365 431 km2 including the few islets that belong to it, and the enclave of Ferdinades (4 560 km2) which is populated by approximately 19,530 hundreds of inhabitants. The capital city Gazallenoa is the most populated city with a more than 10 millions inhabitants.

The country is officially a presidential republic, but de facto is an authoritarian republic led with an iron fist by general Sullivan Di Foxycionni and his National-Capitalist Pact. San Castellino is usually quiet in the foreign affairs due to a nationalist and isolationist policy.

Originally called San Constantino by Stillian explorers - in honor of Saint Constantine - the name "San Castellino" appears for the first time in the 17th century in the memoirs of Juan Cristobal, a Stillian writer who immigrated to Gazallenoa. Apparently, the name is the result of a distortion of the original name by the local indigenous population. But it is really from the beginning of the 18th century that the name San Castellino is popularized.

Although San Castellino is the official name of the country, there are several nicknames, the most famous of which is the affectionate name "Castie" which even gave birth to the patriotic song "Me gustaría estar en Castie" ("I wish I was in Castie"). 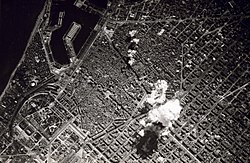 Bombing of Gazallenoa during the civil war.

President Sullivan Di Foxycionni is the Supreme Leader of the Republic, while also serving as leader of the National-Capitalist Pact. La Joie Divine N'Golo, Secretary of State of the parti, serve as a sort of Prime Minister with very few powers compared to the Supreme Leader. The National-Capitalist Pact is indeed the ruling party and the only party authorized at San Castellino. The party concentrates all power and controls the state, with all top functionaries being chosen from among the party's top "activists". The Cristeros, a division of the army that serves as the political police, maintains the cohesion of the party and its absolute power over San Castellinos society. The National-Capitalist Pact also elect the Supreme Leader, which select the Secretary of State among the party. Officially, the government follow national-capitalism, an ideology theorized by Alonzo De Danli and characterized by ultra-conservatism, chauvinism, a deep attachment to Tacolicism and the idea that only the richest people in a country have the legitimacy and intelligence to run that country. But, in fact, the national-capitalist dictatorship became a corrupted authoritarian republic governed by a group of oligarchs around the National-Capitalist Pact.

The national currency is the San Castellino's Peseta (SCP).

The economy of San Castellino, unlike most dictatorships, is very weakly controlled by the state. Indeed, the country's economic doctrine is conducted in accordance with the official ideology of the country, national-capitalism, which advocates ultra-liberalisation of the large majority of markets and almost total privatization of services. As some famous examples, we can take the privatization of water, which is written into the constitution of San Castellino, or the fact that healthcare is managed by the Ministry of Economy.