Vetok, officially the Unified Imperium of Vetok, is a nation in northern Europa on Eurth. Vetok shares a land border with Volsci in the north, Baranchia and Mongol-Swedes in the east, and Philippia in the south. The country is located on the Buranian subcontinent. The climate in Vetok is mostly humid continental. Vetok lies on the Kosscow Sea to the west. Vetok has a population of approximately 11.2 million, and an area of 629,707 square kilometres (243,131 sq mi). Carrishem is the capital and largest city of the country.

Vetok is a parliamentary imperial theocracy. Its historical development is linked closely together with the Congregation Of Humanity Unchained. As a Buranian nation, it was historically opposed to the Aroman Empire in the Occident. The current head of state is Emperor Vetok XII.

Vetok trades with neighbours since it emerged from isolation. It has an active merchant marine as well as a fishing fleet. After its first faltering steps onto the international scene, Vetok joined several international organisations. However, shortly afterwards, Vetok once again ventured back into isolation.

The named "Vetok" comes from a mythological religious figure called The Great Vetok. His congregation of followers believed that their leader kept them from falling into the dark pits of morality.

A humid continental climate is prevalent throughout Vetok. This is ideal for the growth of forests, temperate woodlands and temperate grasslands.

(The capital city of Vetok is Carrishem. A sea to the west.)

A mountain valley in Vetok.

The first inhabitants of what was to become Vetok were migrating tribes of modern humans, or Homo Sapiens, who moved across the breadth of Europa into the open grasslands and mountain valleys that lay before them. Modern researchers and archaeologists have, over the years, slowly worked to pin down and identify what they believe to be the original

Over a thousand years ago, the land that was to become Vetok was nothing but grasslands and mountain ranges dotted with villages. Thanks to the spread of these villages, and the sheer distances between many of them, few people ever left their village for another. Only a few exceptions existed, with towns on the coast benefiting from their use of boats to visit others.

Emperor Vetok XII is the 78-year-old monarch, famous for removing the 'Crusader' faction from a position of influence in politics. He speaks Vetoki as well as Common. His Holiness is unmarried and has undertaken a vow of chastity. The Emperor resides in the Temple-Palace of the Central Municipality.[1] 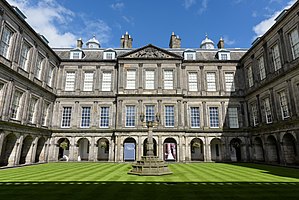 The national government is divided into a number of different Ministries, each of which has a separate area of the government to deal with, and each with their own Minister controlling the Ministry in question. These are, respectively:

After its first faltering steps onto the international scene, Vetok joined the alliance of nations known as the League of Imperial Nations. However, shortly afterwards, Vetok once again ventured back into isolation for a period of two years before re-emerging, where it joined the organisation better known as The Conglomerate. 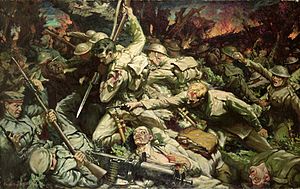 In its earliest history as a united nation under one leader, Vetok was a feudal state. The chief of the priest-kings, Tollivant the Wise, was given tribute by his subordinates in much the same manner as many other states, typically offerings of collected riches robbed from the dead victims of their rites, or offered lives. Such was Tollivant's 'wisdom' that he manipulated these sacrificial offerings, throwing them into gladiatorial pits for the pleasure of fighting and dying to prove their worth to him, and to seize the prospect of a better life. Such a way bred cruel and decadent fighters, and they in turn oversaw the levy-masses he ordered to war. The irony that they would have been in such a levy just a few years previously was lost on them.

The Vetokite military has always been traditionally based around a strong navy, given the high proportion of coastline and the proximity of many populated areas to that same coastline. Over time, however, it has slowly grown to incorporate additional branches, such as the Air Force, Special Forces, and the Strategic Weapons Command. At the moment, figures for enlistment in the Vetokite military stand at over one million men and women in all branches. This counts solely active-duty personnel however, and the number of reserve personnel who have been discharged but remain ready for duty is estimated to be around the same number.

The Vetokite military regularly conducts training exercises with the forces of the Volsci military. 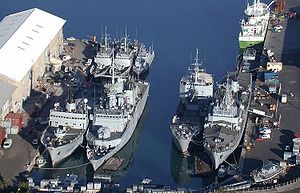 Vessels of the Vetokite Navy at Port $Name naval base.

The Vetokite military has a variety of military bases built to suit the needs of the various branches. Each branch has a 'flagship' base regarded as the traditional home of that branch in particular, and often serves as the headquarters for all elements of that branch.

While most bases for the military are very visible to the public, there exists three exceptions. Foremost of these is the headquarters facility for the Strategic Weapons Command, buried high in the Central Highlands of Vetok. For obvious reasons, the government has never publicly identified even the proximate location of this base. The second of these is what's known as the 'Last Chance' Deep Cover Government Safehouse. 'Safehouse' is somewhat of a misnomer, as the 'Last Chance' facility is large enough to house the entire government, along with associated support staff and a security force. Speculation is rampant about the location of the base, with rumours suggesting that it lies in the mainland occupied by Vetok.

The last facility is VNB Neptune. The use of a name of a sea god for a freestanding naval base was appealing to the members of the Vetokite Admiralty Board, especially given that the base is a full naval shipyard and defensive facility able to host a complete carrier force. The base is supplied by both airlifts and regular convoys of cargo ships supplying the fuel, ammunition, food, and parts needed to maintain this labour of effort. The base is also armed, with multiple SAM batteries and AShM launchers mounted to provide an effective defence.

Vetok is a nation that has always prided itself on trading with neighbours since it emerged from isolation. It has an active merchant marine as well as a fishing fleet. Vetok is the home to the major international corporation, The International Small Arms Conglomerate.

In its culture, Vetok bears similarities to most other first-world nations, being rather liberal in nature and offering a multitude of economic, personal, and political rights to citizens.

The Congregation Of Humanity Unchained. For hundreds of years, following the toppling of the priest-kings of old with their vile gods and barbaric blood-rituals, atheism dominated. The followers of the great Vetok himself believed that any who held a belief, be it ever so benign, was only ever a few steps away from falling into the dark pits of morality that had spawned the foul religions and living sacrifice of other human beings that had been overthrown at such great cost. It did not take long for His disciples to conglomerate together, forming a hierarchy as those who'd been His most trusted confidantes.

Retrieved from "https://iiwiki.us/mediawiki/index.php?title=Vetok&oldid=417923"
Categories:
Hidden categories:
This page was last edited on 27 October 2021, at 18:54.
Privacy policy
About IIWiki
Disclaimers