War of the Habstrian Succession

The War of the Habstrian Succession was a military conflict between most of the great powers of Dolchland, lasting between 1795 and 1797. It marked the beginning of Pax Panedonia, an era lasting about a century in which the Kingdom of Panedonia ruled Dolchland with relative peace. 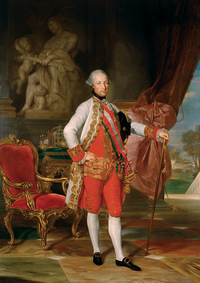 The conflict began following the death of King Leopold III of Habstria, who had no sons. Immediately after word of his death spread, two major factions formed around two possible heirs: Heinrich, Duke of Gloschlick, the nephew of King Leopold through his sister Josephine, and Francis of Ausburg, Leopold's grandnephew through his brother Albert. Habstrian succession law was unspecific and, having died unexpectedly, Leopold left no will. It was debated heavily in the Habstrian Royal Estate whether an heir could pass through a female relative, or through a solely male line.

Francis of Ausburg was only 16 when his great uncle died, and resided with his mother Theresa of Wurveria, the half-sister of King Alexander of Wurveria. Upon hearing of Leopold's death, Theresa declared that Francis was the rightful heir, however Heinrich had already sought support from several powerful Habstrian nobles along with the central army. Heinrich succeeded with many Habstrians as he played up fears that Theresa would force her son to renounce his Ausburg name, and become a member of the House of Wurveria. Heinrich, whose mother and father were cousins and thus both members of the House of Ausburg, had inherited the Duchy of Gloschlick, a very wealthy province with a sizable levy that could be used to seize power quickly in Morthal. The young Francis and his mother moved to Rotcassel Palace soon after hearing of Heinrich's intentions. Two months after the death of Leopold, Heinrich had himself crowned king in Morthal Cathedral, and soon after dispatched a force to capture Francis and Theresa, which they did and transported them to Alberhof Palace.

Upon hearing of his half-sister and nephews kidnapping, King Alexander of Wurveria declared war on the new Habstrian regime and declared Heinrich illegitimate. Alexander soon called his ally Panedonia into the war, and soon the conflict became less about the succession of the Habstrian crown, but about power within the Empire. Soon after the break out of war, Heinrich called his vassals Bessen-Katzenelm and Macklenover to his side. However, while the King of Bessen-Katzenelm accepted his liege's call to arms, the King of Macklenover refused to raise his armies. Heinrich took this as an act of treason and rebellion and sent his army to capture Bertricht and the Macklenoverian royal family. Upon hearing of this, the King of Macklenover took up residence in Enselhof Palace in Panedonia, and rallied his armies there. The Habstrian army, unable to capture the King, sacked Bertricht, destroying much of the old city, and executing nobles loyal to the Macklenoverian King. Macklenover would be under Habstrian occupation for the entirety of the war, with exiled troops being placed under Panedonian command. The war ultimately lead to Macklenoverian independence and the establishment of the Kingdom of Macklenover in 1796.

After securing Macklenover Heinrich moved a large force to his possession of Gloschlick, where he met the combined forces of Panedonia, Macklenover and the Electorate of Runesburg. The battle of Switz-Gloschlick was a decisive battle in the war and a crushing Habstrian defeat, it also made many Habstrian leaders question the leadership and legitimacy of Heinrich. By 1796 both sides were weakened, especially Habstria. This lead to a peasant's revolt led by republican Johan Tapp and a council of revolutionaries. The revolution was quickly suppressed, however they did succeed in executing the Elector of Compenburg and Erska, along the majority of his family and much of the city of Compenburg which was loyal to him. Tapp and most of his fighters were severely punished, and the Compenburg massacre is often used as a way of justifying anti-democratic policies in Dolchland.

While this was occurring in the south, a marshalling northern force raised by Dietrich I of Bessen-Katzenelm, with ample assistance from the nearby states of Tale-Schüssel and Tale-Flußstadt and Ersau, both historic allies of Bessen-Katzenelm, was readying to move south. The church made no official declarations of support for either side, though the Bishop of Kirchmarkt and Teilen, a title with a history of meddling in secular affairs, declared his own tacit support for the Habstrian cause. It soon became clear that the Streckeburger principalities, both Lower and Upper, were seeking to use this Empire-spanning conflict to elicit support abroad for each one's claims over the County of Teilen. Upper Streckeburg, historically closer with Tale-Schüssel, was talked out of involving itself in the war. Albrecht II, Prince of Lower Streckeburg, however, opted to enter the war on the Panedonian side. Almost immediately, Streckeburger forces crossed the border and within two days held onto Mittelsdorf in Teilen. Though unwilling at first, Kirchmarkt and Teilen were forced to declare their support for the Habstrian cause, and a large combined army under Dietrich I met the Streckeburger forces at the Battle of Geringdorf, where Albrecht II's forces were soundly defeated. Albrecht continued to suffer loss after loss, being driven further into his home territory. Eventually, Albrecht changed tactics, employing his own Jägers, as well as some independent members of the Streckeburger Jägers, to engage in guerilla warfare against the more organised troops of Dietrich I. For much of the war, the large force intended as a relief force for the Habstrian throne was tied up in Lower Streckeburg, fighting off small bands of Jägers, and with every retreat out of the territory, the Streckeburger forces clawed back the land they claimed.

By early 1797 in the south Panedonian forces had liberated most of Macklenover and were now pushing into Habstrian territory. In the north Wurverian, Runesburgian and anti-Heinrich Habstrian forces were moving towards Morthal. This led to widespread desertion and defection among the Habstrian ranks. General Wilhelm von Gausmacht, a Habstrian general fighting the Wurverian push, decided that Heinrich should be removed from his position as King, and decided to use his forces to assist in the push to Morthal. By August, the city of Morthal was under siege, and Heinrich was forced to surrender by his own Palace guards.

A few months later the Treaty of Morthal was signed, recognising the now adult Francis of Ausburg as King Francis II of Habstria, recognising the independence of Macklenover, and ceding the Duchy of Gloschlick to Panedonia. However, Francis would die with only female descendants, and the throne passed to Heinrich's grandson. The Treaty of Morthal also concluded the war in Drei Flüsse, though with the stalemate of both sides, no exchange of territory was made.