The First Argic War, was a global war that lasted from 1949 to 1954, although related conflicts began earlier and were, in some places, resolved later. It involved the vast majority of Argic nations — including all the great powers — eventually forming two opposing military alliances: the As and the Bs. It was the most widespread war in history, and directly involved more than xxx million people from over xx countries. In a state of "total war", the major participants threw their entire economic, industrial, and scientific capabilities behind the war effort, erasing the distinction between civilian and military resources. Marked by mass deaths of civilians and the strategic bombing of industrial and population centres (in which approximately x million were killed) and including, at its close, the use of atomic weapons, it resulted in an estimated xx million to xx million fatalities. These made the war the deadliest conflict in human history at that time.

(WIP. I'd like Ebrary to be a part of the wars. In 1943, the 2nd kingdom of Ebrary was installed in a coup backed by Seylos and Great Anglia. So, Maybe that would determine Ebrary's allegiance.[1] That would be welcome. The Central Argics would have needed help likely with food, rubber, cloth, and other basic commodities.[2]

(Currently, the two sides are the Periphery Alliance (PALL), and the Central Argic Powers (CAP). CAP is anti-colonial and generally opposed to any Europan or globalist trade influence.[3])

Dniester had long been part of the Ahranian Empire, along with several other nations in central argis, however unlike the others it did not have loyalties to Moskovo. This angered the Ahranian government, which wanted to solidify its rule over its surrounding states. In the build up to the war Ahranian leaders spoke of their anger at Dniesterian posturing.

From 1932 to 1948 Delamaria was under the rule of Howard McMadden and the National Party. The regime slowly edged towards totalitarianism in the 1930s, and by the 1940s it had become a military state, with secret police eliminating any opposition, and democratic institutions such as congress being severely weakened. During the regime's rule Delamaria took on major military and industrial expansion, to fuel the expansionist desire of McMadden. In 1948 however McMadden suffered a stroke, and his relitively estranged vice president William Charleston quickly took control, reverting many changes made by McMadden's decree. When McMadden recovered a near civil war broke out, and preperations were made to have forces loyal to McMadden attack and seize army and naval bases. However McMadden was shot and killed, leading to nationalist support crumbling. The nationalist debacle created public resentment for massive expansionism internationally, and the new government quickly reorganised to reinstate democratic institutions.

(WIP. CAP is proactive in 1949 and PALL is reactive. CAP took the first strike advantage and made strategic gains until 1954, but was forced into a stalemate after the PALL rallied and forced CAP to sign the Treaty of XYZ. It was originally planned to be against NPCs, so the Central Argic Powers lose. Iverica was part of the Periphery Alliance — so winning. The first Argic War is a chance for CAP members to have made historical strategic victories, though.)

In the early hours of January 1st, Koudish and Rusian forces took up offensive positions near Korelio, a small country between Rus and Dniester. The Rusian army quickly crossed the border, having cut off phone and telegraph lines in order to maintain stealth. Koudish forces landed on the southern shore under the cover of darkness and quickly seized a harbour in order to bring in more troops in the following hours. As much of the country was celebrating new years, bombing raids over Korelian bases and some towns began, with some initially believing that the sounds of explosions were fireworks. 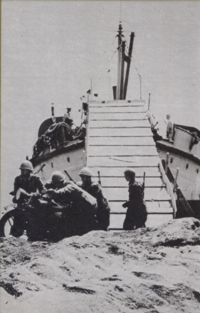 By the time it was day Korelian forces realised the massive attack that was unfolding, and rapidly moved to defend the country. However the army was disorganised, and reserve troops could take days to mobilise. Within the following days most of the north and south west was occupied, and invading forces continued to push with little resistence. By January 15th most all of the country was occupied bar the last stand of Korelia in the central highlands, and the surrounded government was forced into surrender.

Ultimatum and escaltion into Iverica

Soon after the annexation the Prymontian state of Ostport issued an ultimatum to the occupying powers, to evacuate Korelia immediately or face war from Ostport and her allies. The ultimatum was mostly ignored by the recipients, and as such within days Ostport and its allies declared war on the occupying powers. The Rusian allies of Narva and Galicia soon after followed their ally and declared was on Ostort, triggering a counter decleration by Iverica on all four aggressors. Fighting quickly ensewed, with Galician and Narvan forces quickly coming into conflict with Iverica. Soon after this Ostport and its Prymontian allies, along with Iverica formed the Periphery Alliance.

Ahrana had long been planning an invasion of Dniester, and as such most of its armed forces was located nearby to the Dniesterian border. However much of the government was weary of the reprecussions of such an invasion, as Dniester was in good regard by nations that many believed would be too hard to defeat in warfare. This changed when Koudiland and the Rus began their invasion of Korelia, the hightened tension and ensuing chaos made an invasion easier in the eyes of Ahranian military and government leaders, and ultimately the decision was made.

From January 17th to 20th, several false flag operations, orchestrated by Ahranian intelligence, took place, leading to a full scale invasion by the Ahranian army. The Dniesterian army was ill equipped, and lacked much of an air force to repel Ahranian air attacks against defencive positions. Most of the Dniesterian army was defeated within the first month of the conflict, and soon after the only resistance the Ahranians in much of the country faced were local civilian militias and police forces.

The invasion of Dniester was one of the first major examples of tank warfare seen in the wurld. Dniesterian tanks were built lightly, with a small frame and a light crew, the tanks were highly maneuverable and could outpase much that it fough however Ahranian tanks were highly advanced, with fast speed, high firepower and armour that could easily deflect most of the Dniesterian tank's shells. The tank divisions, combined with aerial attacks, allowed the Ahranian forces to quickly take control of the Dniesterian countryside, and surround cities for infantry advances.

Dniesterian light tanks (top) were no match for the modern Ahranian tanks (bottom).

On February 19th Rusian and Koudish forces in Korelia also entered Dniester, capturing key fortifications and cities. Divisons quickly moved eastwards to meet Ahranian forces, and cut off Dniester's northern forces from the capital. Dniester was effectively cut in two at this point, and northern armies quickly felt the brunt of the lack of supplies.

By March 1st Ahranian forces had reached Minsk, and fierce fighting took place in the streets. The Dniesterian government fled the city, and set up a temporary headquarters in the port city of Krakansk. Dniesterian forces mustered all the strength they could to repel the superior Ahranian forces, but by the end of March most of the country in the control of Ahranian, Rusian and Koudish forces. Through the first week of April 1949 all of the remaining pockets of resistance had been crushed by Ahranian divisions and all that remained was the fierce defence of Krakansk. By April 9th all important government personnel along with thousands of fleeing civilians fled on ships, escorted by the remnants of the Dniesterian navy. The city soon fell to Ahranian forces and a Dniesterian government in exile was formed in foreign capitals.

The Ahranian, Koudish and Rusian governments soon drew up new borders where Dniester once was, with Ahrana annexing all of the eastern portions of Dniester, while Rusian forces occupied the west. Ahranian forces evacuated some regions marked for Rusian occupation, and occupational forces soon arrived to maintain their new territory. 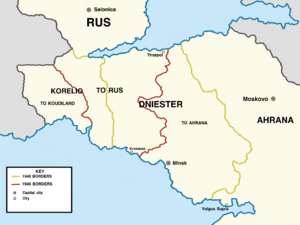 The partitioning of Dniester.

This invasion was considered an act of aggression by the Periphery alliance, who saw the Ahranian expansion as collaboration with the aggressive powers, and as such a decleration of war from the Periphery powers was sent to Ahrana. At this time Delamaria declared its intention to join the Periphery Alliance, and quickly moved its forces to support fighting in the Iverican penninsula, and to support exiled Dniesterian naval forces. Admiral William Satterlee set up the Dniesterian Free Naval Force, comprised of uncaptured Dniesterian ships and sailors, under the supervision of the Delamarian Navy.

Founding of the Central Argic Powers

After the declerations of war following the invasion of Dniester, Ahrana moved to ally itself with the other proactive powers. The Central Argic Accords were signed in Moskovo with representatives from many nations, and the Central Argic Powers was founded, initial members included Ahrana, Elde, Uppsund, Rus, Koudiland, Transbaltia, Galicia and Narva, however several other Argic nations would soon follow. The Central Argic Powers, CAP for short, quickly moved to integrate their militaries and combined their efforts, with Ahrana taking a leading role as the most powerful member state.

(WIP. The Treaty of XYZ prolonged cold tensions until the 1960s. Ultimately, in the Second Argic War, CAP fractured, being unable to match the industrial output of PALL. However, CAP succeeded in keeping some core territories save for a few that were occupied and made to accept a puppet government (Koudiland, Korelio/South Prymont).)