Gaism (Guy-is-um, or Gaiei|Mahanan: गास्सिस्म) is an Oriental religion that originates in the Ghobari Valley of Mahana. The religion is based around the worship and following of the bovine god of Kuladara and her teachings. It is similar to the three other major Oriental religions of Hinduism, Buddhism and Sikhism in many of it's teachings and traditions, however can be closer compared to Christianity with it's structure and systems. The religion is spread through much of Oriental Europa, however is most prominent in the religions 'Holy Land' of Mahana. Gaism encompasses a variety of traditions, beliefs and spiritual practices largely based on the original teachings of Kuladara. The religions followers are those who belive in Kuladara and her teachings, as well as the claim of the creation of the world by the single god.

Gaism is a diverse system of thought marked by a range of philosophies and shared concepts, rituals, cosmological systems, pilgrimage sites, and shared textual sources that discuss theology, metaphysics, mythology, yoga, agamic rituals, and temple building, among other topics. The religion also remains diverse in the way it is taught, especially outside of Oriental Europa, known as Western Gaism. Despite this, all branches of Gaism hold the common belief that the sole God of Eurth is Kuladara, and they follow closely with their teachings through the Pustaka (Holy Book).

Gaism began in the Ghobari Valley, where evidence from around 4000BCE which shows the people worshipped cows with sculptures and art left behind. It is believed that it evolved into a more modernised version of the religion around 3200BCE, during the Jhuapi Punha Dynasty, which is known due to early scripture and text that has been found near the village of Ura in northern Mekabiri, just outside of the Ghobari Valley. The early followers spread throughout Orient, to Mahana, Kotowari, Mekabiri and Tamurin as well as having an early presence in Marenesia in Safiloa. Despite early religious persecution, mainly by Koto Hindu populations, it spread widely throughout the sub-continent. Mahana became the holy land of the religion as the first ever Gai, Achalendra I, settled in the ancient city of Vaddkewatta in 433BCE. Subsequently, this brought great wealth into the region, with pilgrims donating to the Gai in exchange for their acceptance into 'Pachikō' (The afterlife) by Kuladara.

The name 'Gaism', or natively 'Gaiei', originates from the ancient word in Mahanan Gaiemamu meaning 'Soul of the Cow'. Since then, the word 'Gai' slowly evolved into the generic word for 'Cow' in Mahanan, despite the name 'Gaism' originating before that. 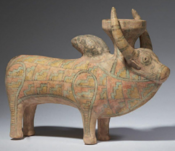 One of the few bovine sculptures showing evidence of early Gaism in the GVC.

Evidence of a similar religion's existence dates back as far as 6,000 years ago, during the Ghobari Valley Civilisation and it's short cultural reign over the region. The earliest found evidence is a famous cow sculpture[1] that was uncovered in almost perfect condition after being buried under sand for almost five and a half thousand years before it's uncovering in 1884. The markings on the sculpture suggest that it was used in worship, with sacrificial pedestals found in the same area suggesting it was a part of early Gaism. Similar markings and stone texts show similar signs, if translated correctly. A lot of early Gaism evolved closely with Iron Age Mahana, being prominent at similar times. The first mention of 'Gaism' is in the original Gai texts that also recognised Mahana as a singular state, despite it being split[2], in 3200BCE. It is also believed at this time that Gaism had started to become closer to the modernised version of the religion, due to this some take this time as the founding of the religion. 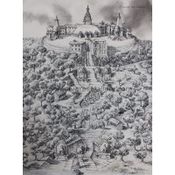 In c.2600BCE Panesh was born as the prophet and only child of Kuladara in the city of Veydu in the Jhuapi Punha Dynasty. Upon the birth of Panesh, many began to spread the word as his mother, Jua, told the people of Kuladara's visiting of her and fortelling of the child's prophecy. Upon this happening, many doubted the woman however others became her followers. Many of the Hindu populations refused to believe that Panesh was the son of any god, so tried on multiple occasions to assassinate the boy, however failing due to the protection of his followers. The rest of Panesh's Life played out, with Gaism becoming much more popular in the region throughout the course of his life. It is believed that even as early as 2400BCE, Gaism had spread as far as Tamur and soon after as far as Safiloa, which evolved it's own version of Gaism known as Pushpambara Gaism. The end of ancient Gai history came with the establishment of government for the religion with the 'Gai' at it's centrepiece, with the first Gai, Achalendra I, who settled in the ancient city of Vaddkewatta, building the Bhunath and turining the city into a site of great religious importance.

Achalendra's first act as Gai could be viewed as a political pleaser, as he established the 'Gai Holy Lands' in the script 'The Dhārmika Sīmāharū Book'. In the book, the 'Holy Lands' were a set borders that, as according to Kuladara's wishes, should be lead under one secular state. The validity of the claim is disputed, as some historians believing it to have been used to keep Gai-Monarch relations stable, by claiming Mahana more land.

Following the establishment of Mahana as the religious Holy Land, a great amount of pilgrimages began to be made into the region from the Gai populations in other regions. This also lead to a small scale economic revoloution for the Gai government as well as for Mahana, both whom profited from the pilgrimages.

By 230BCE, Gaism began to spread further due to the Pearl Road, which spread the Oriental religion into Azania and the Occident evidence suggests. During the times of the rise of the Aayan Empire[3], the Gai population was kept at peace with the Hindu population through appeasement, which was a major step in a powerful united state for Mahana. Despite this, it is believed the empire leant more towards Gaism than Hinduism. Before the war between the Aaya and the Shakyan Principalities, Emperor Ujesh took a spiritual pilgrimage, which ended in his visit of the Bhunath and to Gai Palash II. When he visited Palash, he asked for his blessing to go to war with the Shakyans, which had become known for their general mistreatment of the religious populations. Due to this, Palash gave the Emperor a holy blessing, and in honour of his pilgrimage, crowned him 'Guru Ujesh'.

A later instance showing the importance of the religion was claimance of the Samripe Mountain Range by the Nadal Empire in 703CE, which further displayed the religions importance as they received blessing from Gai Tej III, which gave them reason to claim the mountains in the three-way war for the Mahanan Holy Lands between the Kurula Dynasty, Nadal Empire and the Ekaviri Empire.

In 1023, under the decree of Gai Tej V, the idea of a united holy lands under one banner became more and more popular, even with the wars between the dynasties that had been raging on and off for 300 years. The Kurulan Crusades took place in the same year, which resulted in the collapse of the Ekaviri Empire as well as the unification of the first Mahanan state by King Raj I.

Gaism became the nations majority religion quickly, with other groups such as Hindus and even the Buddhists migrating out of the region in small parts over the first couple hundred years of unification. It also became an even more prevalent and important religion in Oriental Europa.

During the 1300s, great temples[4] began to be constructed widely throughout areas with Gai population, many being grand structures as in accordance to their beliefs Kuladara requires a grand showing from her followers. This was interpreted by the priests of the time as turning the temples into rich sites of worship using material goods. This was met by some disliking from certain members of the government of Gaism, who preferred to keep their more modest temples as that was how they interpreted. This lead to the broad formation of Suntale Gaism, which followed the more modest beliefs, and were less strict on many of the teachings.

Temples and Places of Worship