The Grand War is an ongoing global conflict. In April 2021 the Kingdom of Great Anglia initiated the conflict with the Battle of Broerland by moving its armed forces across the bridges spanning the gap between Great Anglia and Lysia.[1] The conflict is motivated by Anglian imperialism.[citation needed]The war has since expanded greatly, and conflicts are now taking place on multiple continents. The international community has condemned the Anglian aggression.[2]

The reasons that led to this conflict were many years in the making. In Great Anglia, the ruling monarch King Creighton III was a proponent of expansionist annexation of the rich Occidental neighbouring states. Evenly inspired and intimidated by the country of Adaptus, another militaristic neighbours, the Creighton directed the military to target other countries which would be less likely to retaliate. This included Lysia and Suverina. Another factor in this decision was the pacifist political stance of these countries, viewed by the Anglians as weak and negligent.

Across the Raga Sea, over in Amutia, a long-running dispute of the exact border location between Suverina and Qubdi had festered for many years. The lands in question had been in dispute ever since 1961, when Suverina annexed the non-declared area without official negotiation between the two states. Tensions increased in early 2021 when Qubdi unilaterally pressed on with its own version of the border claim.[3] 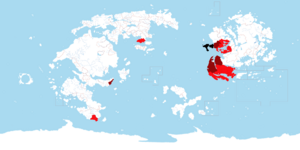 The conflict is still ongoing.

LAANN on May 1st imposed a stop and search embargo on all shipping to and from Great Anglia.[44] Neighbouring countries also responded. Tagmatium imposed their own sanctions the very next day.[45] Haruspex deployed troops along their southern border with Tagmatium.[46] By May 12th the EOS publicly announced their own sanctions.[47]

On July 13th President Deborah Van Roose of Delamaria announced a series of sanctions on Great Anglia and other members of the Occidental-Azanian Pact, as well as a stop and search embargo on any ships or aircraft in Delamarian jurisdiction.[48]