Batengdei, also referred to as the People's Republic of Batengdei, is a small socialist nation in the northern region of Marenesia. The country traces its roots to a group of Marenesian sailors who had become lost at sea, eventually settling on what is now modern Khaokhett. The citizens of Batengdei are a mixture of ethnic groups varying by geography. Cultural and religious practices range from traditional animism to Salvian Catholicism.

The Kingdom of Batengdei was an absolute monarchy based on a few noble families forming multiple different dynasties.

Capital city of the Tomekang Dynasty

The Tomekang Dynasty was the first span of monarchs to come from the series of warlords and regional governments before the final establishment of Batengdei as a sovereign nation. The family reigned from XXX-1XXX. They were notable for emulating the traditional governing system of the Yellow Empire, though the dynasty claimed to derive its power from the Christian God.

The Tomekang Dynasty is unique for restructuring the Batengdeian government to a federated kingdom. It divided the nation into three regions, the Khlang Region to the East, the Central Kham Region, and the western Hang Region. These regions were under the sovereign control of Khaokrong (modern-day Khaokhett), which was the designated imperial capital of the Kingdom of Batengdei. The federated system was intended to appease the unification of three prominent warlord groups, the Chuchea, the Man Lao, and the Krenik Dav.

The dynasty, while more federated than previous regimes, maintained emphasis on separate but powerful monarchs. Khaokrong, being largely inaccessible from the mainland, proved to be a strong seat of power throughout the dynasty and onward. The Tomekang Dynasty began developing the island capital into a royal capital. The Saphea Wat, the massive capital complex of the ruling family, began and finished construction between the rule of Cheng Tomekang I and Cheng Tomekang II. It is considered one of the greatest construction projects of premodern Batengdei, using an estimated 200 tons of rock to be carved into the final structure. It had a dual purpose of serving government roles and as a temple to growing groups of Buddhist and Christian followers. Despite housing two very distinct religious groups, Saphea Wat itself encountered little in the way of religious tensions due to heavy restrictions against displays of animosity. Despite a lack of religious tensions within the temple, however, the dynasty suffered from conflicts outside of the capital.

Between the regions grew increased tensions of religious division. Christian regions such as the Khlang region demanded Buddhists within in it convert, whereas the other regions refused to allow the construction of large Christian places of worship. Ultimately, these tensions led to the downfall of the Tomekang Dynasty when the Min Lao family rose up with an army to conquer the other three regions. The Tomekang were unable to marshal significant ground forces to oppose them and were eventually forced to abdicate, ushering the Min Lao Dynasty.

The Min Lao Dynasty was a relatively short-lived family rule of the Min Lao family. The dynasty is notable for the expansion of the Khaokrong island-capital to the surrounding shores of the Banleak Bay. It established a variety of key cities along the bay. It was also the first to suffer from overfishing within Banleak Bay, due to the large-scale centralization of the Khaokrong capital and the region surrounding it. The dynasty was ultimately unable to support the increased population within the Banleak Bay region and suffered mass famines. This, compounded with religious unrest, led to the capitulation of the Min Lao dynasty. 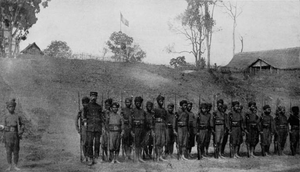 Rapid militarization under the Republican government

The Republic of Batengdei was created after the successful coup of the royal family. The government pushed for crash industrialization and rapid militarization in hopes of becoming a strong contender in the global stage. The republic fell quickly into oligarchic rule, however, with certain powerful military members controlling most of the power and wealth of Batengdei.

The first Batengdeian revolution came from a long period of resentment in Batengdei of the governmental structure of the Repiblic of Batengdei. The dictator of the Republic of Batengdei, Khonan Tabdai, promised that his appointment as "permanent dictator" was simply to ensure the establishment of democracy in Batengdei. However, when Tabdai was on his deathbed with Tuberculosis, he named his son to inherit the title of permanent dictator.

Upon his appointment, Adan Tabdai immediately dissolved the weak provisional congress, claiming it was too corrupt to be the national legislature. Immediately following this decision came the First Coastal Riots, where over one million people began rioting in various cities across Batengdei. The Batengdeian police force was too ill-equipped to handle the scale of the protest, and so was only able to quell cities within a more immediate region around Khaokhett. This resulted in a large region of territory splitting off from Batengdei and becoming

Rule Under the Bateng Rouge

Large mountains of the Agrillian Highlands

Batengdei is naturally hilly, with larger hills and mountainous regions toward the southern Agrillian Highlands. The lowlands of Batengdei see rivers flowing through them and are often the location of major population centers. The southern Agrillian Highlands consist of vast arid and semi-arid climates due to low rainfall. Due to the relative inconsistency of water availability, much of the habited regions of Batengdei are clustered along rivers, lakes, and coastal areas. Most habitation is centered around the coastal region of Batengdei, which boasts an astounding 72% of the total population. Most inland settlements and habitations are built around natural resources such as iron and uranium.

The northernmost peninsula of Batengdei is a sprawling marsh. The region has few tall trees aside from daemotong, which produce a toxic, but powerful sap. While the marshlands have relatively low amounts of inhabitants, the surrounding region is rich with coastal settlements that thrive off the abundant natural resources of the Tonle Baitang region.

Each Khett acts as a regional governing body; there are eight in total in Batengdei, and one federal city. Batengdeian Khett have varying levels of sovereignty such as Khsaandei and Tonle Baitang. These regions also have a local capital, which must be a city governed by the Okrug. All Okrugs have a small 50 member group of elected officials from any party. 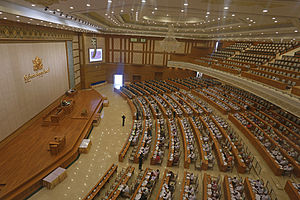 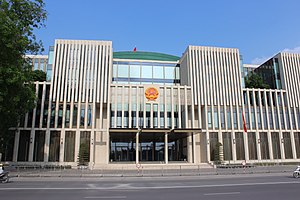 The council serves primarily to confirm proposals from the PGP and as the force of balance between the PGP and the Prime Minister. It may not draft legislation but can propose revisions for drafts in the PGP.

The Prime Minister of Batengdei is appointed by the majority party in the National People's Parliament. Since the founding of the People's Republic of Batengdei, there have been only three instances of a Prime Minister not being of the Bateng Rouge Party, and two out of the three were only in office for one election cycle.

The People's Supreme Court is the highest court in Batengdei. It rules on issues with law-changing importance and is often a source of political change. The court has appointed members, with 15 judges at any time, who are appointed for life or until they resign. All members are appointed by the Prime Minister but can be overridden by a supermajority "no confidence" vote by the People's Grand Parliament or the Communist Advisor's Council.

Batengdei operates under a state capitalist system. Most all of the major industries operate under complete government control, and operate under the Batengdeian Economic Oversight Commission, as well as varied international treaties. Control of state owned countries has evolved throughout the history of Batengdei since the revolution, with many smaller companies have transitioned into larger conglomerate companies.

Much of the Batengdeian economy is structured around extraction of resources. This ranges from natural resources like fish, rice, and corn, to minerals such as iron, copper, and uranium. Within the cities of Batengdei, the economy is primarily structured around refinement of these raw materials, and various service industries. Over time, the Liberal Democratic Party has passed legislature to allow international privately-owned companies to move to Batengdei.

Many of the state-owned companies are operated under single actors, and are often inherited hereditarily. This has led to the slow consolidation of many state-owned enterprises by certain families, often referred to as "oligarchs".

In terms of household devices and appliances, Batengdeian citizens primarily have access to appliances that the government is capable of supplying them with. Given a relative scarcity of certain devices, especially electronics, there are an abundance of repairpeople who maintain old government-issue devices and appliances. Internet access in Batengdei is slow, with most regions lacking high-speed internet connection other than city centers. There are some small-time industries and black markets which can give better access to devices, including some which are not imported into Batengdei.

Cultural practices have a mixture of ancient Marenai traditions and practices adopted from the Yellow Empire and Salvia. Across the country, cultural institutions vary wildly, with a considerable gap between rural and urban areas. The coastal region sees much of the inhabitants of Batengdei and is, for similar reasons, the most culturally homogenous. The coastal region of Batengdei is oriented around traditional Marenai practices, Buddhism, and Salvian Catholicism, all of which have played important roles in the history of Batengdei.

Due to decentralization of cultural practices, much of the traditions in Batengdei vary from location to location. Oftentimes practices are based on more centralized regional rule from larger cities. Batengdei has a history of mass movements based on infrastructure projects, which has led to developed urban areas with large populations, with much smaller fringe settlements centered around the exploitation of natural resources. It is usually in rural areas that more traditional or unique cultural practices exist, whereas urban areas are centered around larger and more diverse cultural practices. Currently the Batengdeian Ministry of Culture recognizes over 130 unique cultures within Batengdei, most being entirely unique to Batengdei.

Environmentalism plays a central part in much of the Batengdeian culture, especially in the south. Emphasis is placed around the cooxistence of human development and the environment around it. Since 2010, the Batengdeian Government has placed a greater emphasis on environmental policy, and has made efforts to restore coastal and inland areas which have been negatively impacted by industrial pollution.

A large Batengdeian cultural icon is the jaguar. It has been seen, across city-states, as a symbol of strength and skill. Throughout Batengdeian culture, the jaguar is used as a symbol of national pride. Notable examples of its usage is the name of the initial figure of the Batengdeian Revolution. The Jaguar is also recognized as the national animal of Batengei. It is claimed King Jerivan of Khaokhet rode a chariot of jaguars in the 12th century in the battle against Salvia.